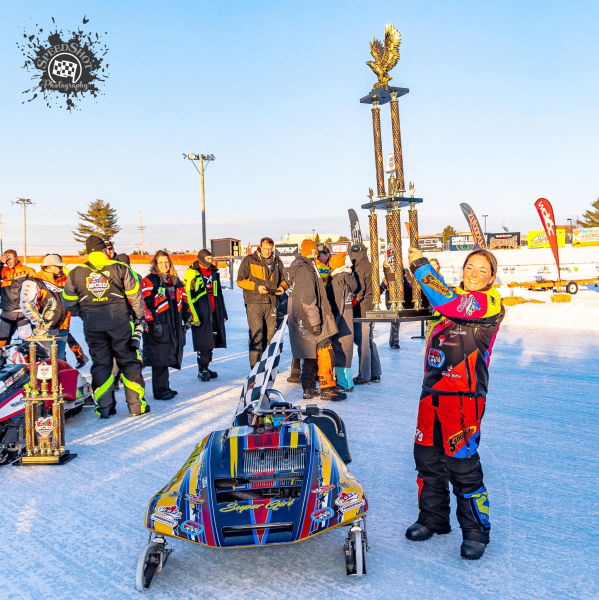 It was an unusual feat that Sabrina Blanchet achieved on Sunday on the icy speedway of the famous oval course in Eagle River, Wisconsin, when she was crowned world snowmobile champion in the Vintage 440 Super Mod category.

At the finish line, she beat 11 opponents, all men, who faced her in a tough ten-lap final .

“It's definitely one of the best victories of my career and it bodes well for the rest of the season,” said Blanchet in a telephone interview with  Journal.

The winner was part of a field that originally had 59 entries, including another woman.

Blanchet learned early on not only to compete with men, but also to manage to get ahead of them on the track.

“I have never been intimidated by guys, even if some must find it particular to be passed by a girl. I have always earned the respect of my opponents. ”

Numerous accidents forced the race management to raise the red flag on many occasions.

< p>“At first I got hit but luckily there was no damage and I was able to carry on. Subsequently, I was able to avoid collisions while keeping my pursuers behind me,” said the 26-year-old driver who led nine of the ten laps of the event.

In addition its triumph in the Vintage 440 Super Mod category, it also won three other victories [in lower categories] and also reached the podium [2nd and 3rd positions] on two other occasions.

This achievement comes at a very good time for Blanchet, who will return to the Grand Prix de Valcourt, which the pandemic has forced to cancel for the past two years.

“ I have good memories of my last presence in Valcourt, recalls the resident of Drummondville. In 2020, I finished second on Saturday in the premier Pro Champ class. However, this year, I am aiming for victories in front of parents, friends and sponsors. That's my goal. »

Note that the Vintage category, which gave it its championship on Sunday, is returning to the line-up for the 40th Grand Prix de Valcourt (February 10 to 12) after several years of absence.

“The goal is obviously to win, even if, as in the Vintage class, the competition is very strong,” she added.

She should take part in the Pro Champ events in Boonville, then in Eganville, two races scheduled before that of Valcourt in a few weeks.

Blanchet was dived very young in the world of snowmobile racing. His grandfather, Gaston Ferland, was one of the tenors of the discipline in the 1960s and 1970s.