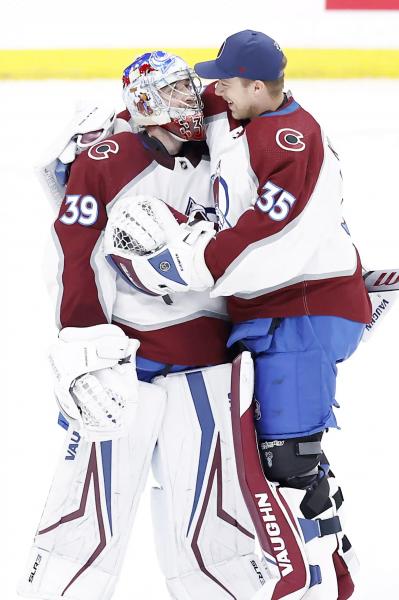 TAMPA | Guardian workload isn't what it used to be. In the last seven seasons, only one of them has seen action in more than 70 regular games: Cam Talbot, with the Edmonton Oilers, in 2016-2017.

The objective behind this tendency to split the work between two reliable masked men is to spare the energies of the trusted keeper so that he can carry the team on his shoulders throughout the elimination run.

Car on this point, habits have remained the same. Barring a disaster, the number one goaltender spends two months in net. In NHL history, few teams have won the Stanley Cup using two goalies.

In fact, according to research by colleague Stephen Whyno of the Associated Press, only three have used two goaltenders for at least five victories: the 1969 Canadiens, the 1972 Boston Bruins and the 2017 Pittsburgh Penguins.

The Avalanche could join that shortlist by winning the prized trophy. Due to Darcy Kuemper's injuries over the past few weeks, he and Pavel Francouz have contributed almost equally. Before the fourth game of the final on Wednesday night, Kuemper had scored eight victories against six for the Czech.

Furthermore, what is fascinating is that Francouz tied a franchise record by winning all six of his playoff games in a row. A record he shares with Philipp Grubauer and… Mario Gosselin. The latter had established the brand in the spring of 1987 with the Nordiques.

In normal times, it often happens that players are more comfortable with one goalkeeper than another. It seems that is not the case in Colorado.

“You've seen it since the start of the playoffs. Both guys had to jump into the fray at one point or another and they got the job done. It doesn't matter who's in front of the net, we're confident,” defender Jack Johnson said.

This confidence was built during the season. Specifically acquired from the Arizona Coyotes last July to help the Avalanche reach the promised land, Kuemper has won 37 of the 57 games he has played.

“Whenever we needed him to raise his game, he did it,” boasted head coach Jared Bednar.

To each his own

“Both of our goaltenders have done a great job all season long,” forward J.T. Compher said. It was like the rest of our training. Players came as reinforcements, some replaced others. Everyone knew how to do their job when it was time. »

After the rain, the good weather

The story of Francouz is special. Never drafted, the 32-year-old goaltender played five campaigns in the Czech Republic and three more in the KHL before crossing the Atlantic Ocean and joining the Avalanche organization.

“  When I was in the KHL, I started to believe that I could make it to the NHL one day. But never, during my years in the Czech Republic, did it cross my mind. ”

“In my first year in Russia. I had not had a good season and I had often been injured. It made me realize that life is full of ups and downs. When you're at your lowest, you have to encourage yourself by telling yourself that the good weather always comes back after the rain. »

It's a safe bet that with his team so close to the Stanley Cup, the sun has never been so bright.