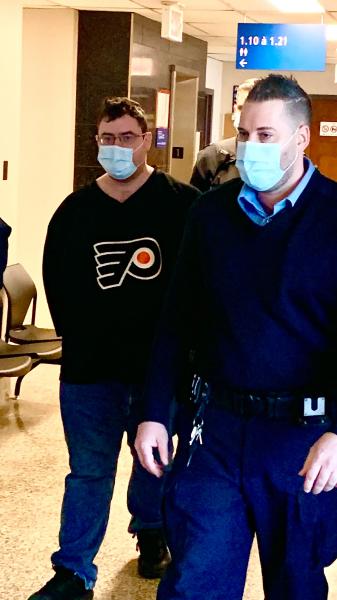 Authorities unconditionally released a young man fascinated by weapons from Drummondville, against the advice of his psychiatrist, who felt he still needed follow-up. And the worst happened.

Dr. Maryse Turcotte had suggested to the Commission for the Review of Mental Disorders (CETM) to keep an eye on her patient, believing that Jean-Luc Ferland still represented “a certain risk to public safety”, in the summer of 2018 .

But the CETM still decided to close the file, and the 30-year-old began to become disorganized.

During the two years that followed, the one who is struggling with chronic schizophrenia missed several appointments with his psychiatrist and stopped taking his medication.

After living with his father and then in a supervised apartment, Ferland moved in with his mother , July 20, 2020.

But Jean-Luc Ferland committed the irreparable act a few days later. On July 26, he dealt dozens of gladius sword blows to his mother, Suzanne Desjardins, during an altercation.

Suzanne Desjardins was killed on July 28 in her house on rue Pinard in Drummondville.

The young man then hid the lady's body in the basement, before burning her personal effects.

Just a few hours earlier, the mother of the family had went to the police station to ask for help to have her son hospitalized.

The victim was concerned, because Ferland was practicing throwing knives on a wooden board, dressed as a soldier. He had several bladed weapons in his possession, although he was forbidden to have any, by order of the court.

Not receiving the expected response, Ms. Desjardins returned home, where she met a sad fate. Her body was not discovered until the following day, after a call from her husband worried that she had not heard from her.

“The evidence reveals that the police intervened within the limits of the powers provided by law allowing them to bring a person against their will to the hospital in order to undergo a psychiatric examination,” reads a press release published at the end of the investigation by the Bureau of Independent Investigations.

Could this tragedy nevertheless have been avoided? One thing is certain, Jean-Luc Ferland's behavioral problems did not date from yesterday.

He made his first acts of violence when he was just a child, threatening a another schoolboy with scissors.

“He was violent and unpredictable when I was young, enough that I slept with a piece of furniture in front of my door. I had a knife under my bed to defend myself if he attacked me, because he had already propped me up against the wall with a knife to my throat twice,” said his sister, Vanessa Ferland. , in court.

Struggling with learning difficulties, bullying and drug use, he left school at age 15. At 17, he made his first stay in psychiatry.

A few years later, he physically attacked his father. Between 2014 and 2017, Ferland had to appear before the court on several occasions, in particular for possession of a weapon for a dangerous purpose and death threats. “In the past, he had strict supervision in the community and that failed,” resident psychiatrist Samuel Gauthier summed up in May to judge Mario Longpré.

Called to give his opinion on the dangerousness of Jean-Luc Ferland, the doctor recommended that he be declared a high-risk accused, which entails strict detention until a magistrate decides otherwise.

“I don't recognize myself in this. I am a peaceful person. I don't want to hurt others, I want to do good around me, ”said the killer. A statement that convinced neither the Crown nor Judge Longpré.

“If he leaves Pinel, Mr. would like to have weapons to protect himself. He is more than dangerous for the public,” pleaded Me Kevin Mailhot.

“This is not the first time that the accused has used bladed weapons during mental disorganization. The Tribunal is convinced that there is a real risk of serious harm,” concluded the magistrate, ordering the strict detention of Ferland.