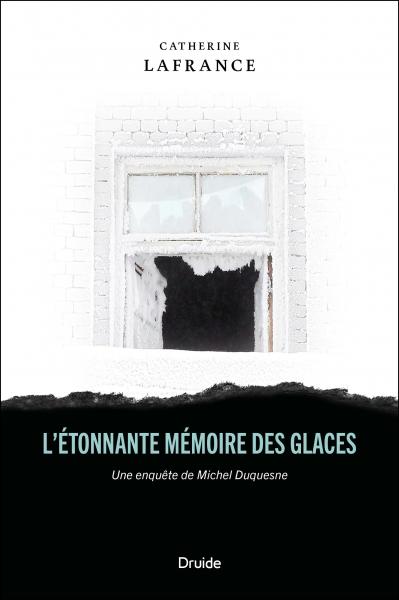 A Nordic thriller, a Quebec signature, a solid plot, an accessible hero, that's what makes for a captivating novel!

It's worth going into The Amazing Memory of Ice by taking a detour to the very end: the acknowledgments section.

Catherine Lafrance indicates that her novel took a long time to write “  since I had to learn to master the very strict rules of polar ».

Yes! This dense and yet short novel, despite its 400 pages, is his first of its kind. But it is up to the best of suspense.

The hero created by Lafrance – already exploited in a few short stories and for which she announces a series – is called Michel Duquesne. He is a journalist, specialist in twisted affairs.

On this freezing January 2, a fire killed 4 people, including two children, in a village in the Eastern Townships. A terrible incident of course, but which is not in the strings of Duquesne. Except the newsroom is deserted, so he has to stick to it.

On site, the experienced reporter quickly notices some oddities: a firefighter who blurts out the words “molotov cocktail”, a very embarrassed policeman, strange marks in the ice, and the observation that the two buildings have been damaged by the flames are located in a very isolated corner of Saint-Albert-sur-le-Lac.

Anne-Marie Bérubé, the journalist for the local weekly, also confirms to him that not everything is clear in this tragedy. Thus, only women and a few children lived in the buildings affected. Curious, isn't it?

And a curious Duquesne, it digs! Except that each information collected accentuates the mystery to be unraveled.

Little by little, the journalist will understand that under the tragedy, networks are at work: prostitution on one side, pedophilia on the the other. But who participates in them, who directs them and who knows what it is all about?

All this is told to us with great credibility. Lafrance was a journalist for a long time, notably at Radio-Canada and TVA, and it rings true to evoke relations in a press room or the quest for the scoop.

She also attaches to her Duquesne personal characteristics, due to a youth on the verge of delinquency, which make him very human. His wife, a lawyer, also lives with wounds from the past, just like the young Bérubé. Enough to make them sensitive to hidden dramas.

Add to that the fact that Lafrance knows how to tell. She signed three other novels before this thriller, and this experience counts. She has a way of keeping us spellbound which, rather than multiplying the twists and turns, is based on the very accurate interactions between the many characters that Duquesne meets.

And then she exploits winter in a effective: snow and ice become essential cogs in the story. Quite a success that this assumed nordicity, rendered with the words that send shivers down your spine!