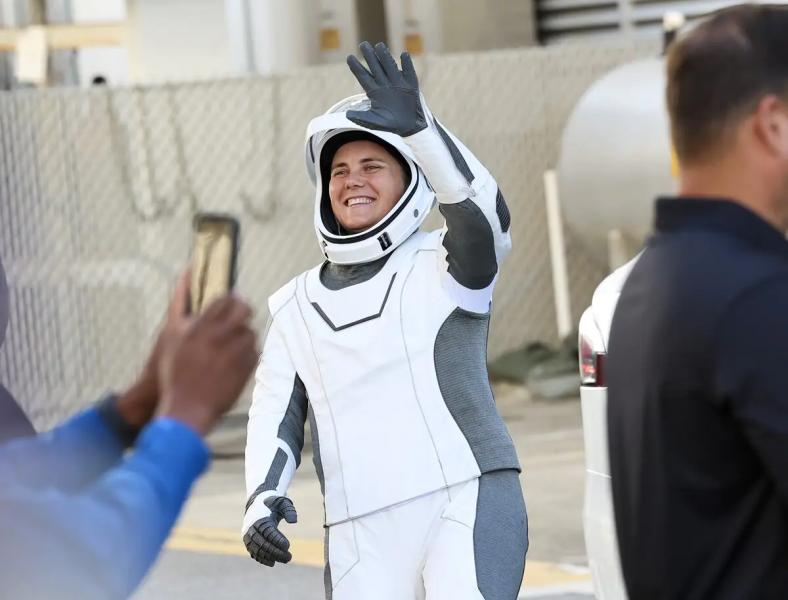 A Russian cosmonaut took off on Wednesday for the International Space Station from the United States, aboard a rocket from the American company SpaceX, a mission that takes on a particularly symbolic character in the midst of the war in Ukraine .

Anna Kikina, the only female Russian cosmonaut currently in active service, is part of the crew Crew-5, also composed of a Japanese and two Americans, including Nicole Mann, who becomes the first Native American to go into space.

Liftoff took place Wednesday noon from Kennedy Space Center, Florida. This is the fifth regular mission to the Space Station (ISS) carried out by SpaceX on behalf of NASA.

Two weeks ago, an American took off for the ISS on board of a Russian Soyuz rocket.

This long-planned astronaut exchange program has been maintained despite the very high tensions between the two countries since Moscow's invasion of Ukraine in February. Ensuring the operation of the ISS has thus become one of the very few subjects of cooperation between the United States and Russia.

Transporting the citizen of another nation is “a huge responsibility”, said Kathy Lueders, associate administrator at NASA, during a press conference at the end of September.

Asked about the current relationship with the Russian space agency Roscomos, she said: “Operationally, we really appreciated the consistency of the relationship, even during a very difficult geopolitical period. »

Anna Kikina, 38 and an engineer by training, becomes the fifth Russian female professional cosmonaut to go into space. “I hope that in the near future we will have more women in the body of cosmonauts,” she told AFP in August.

It is also the first space flight for American astronauts Nicole Mann and Josh Cassada, but the fifth for Japan's Koichi Wakata.

After a journey of about 30 hours, their spacecraft will dock on Thursday at the station, which evolves at an altitude of approximately 400 km.

The members of Crew-5 will join the seven people already on board (two Russians, four Americans and an Italian).

< p>A few days of handover are planned with the four members of Crew-4, before they are sent back to Earth.

The crew of Crew-5 must spend about five months in orbit and carry out more than 200 scientific experiments, including more than 70 never before seen on board the flying laboratory.

Anna Kikina is the first Russian to fly in a Falcon 9 rocket, designed by billionaire Elon Musk's company.

The latter joined the debate on the war in Ukraine on Monday, asking his Twitter followers to vote on his own suggestion to settle the conflict between kyiv and Moscow. This involved in particular the abandonment of Crimea to Russia. The Ukrainian ambassador to Germany replied, still on Twitter, to “go screw yourself”.

Tensions between Moscow and Washington have increased considerably in the space field after the announcement of American sanctions against the Russian aerospace industry, in response to the invasion of Ukraine.

Russia thus announced this summer that it wanted to leave the ISS “after 2024” in favor of the creation of its own orbital station – without however setting a precise date for a withdrawal.

The flight director inhabited at Roscosmos, Sergei Krikaliov, declared to him on Monday “hope” that the Russian government agrees to extend participation in the ISS after 2024.

The Americans have already said they want to continue to operate the station until in 2030.

As things stand, the ISS cannot function without one of the two segments of which it is made up, one American, the other Russian. The latter notably ensures maintenance in orbit thanks to a propulsion system.

Between 2011 and SpaceX's first flight to the ISS in 2020, Russia was the only one able to send astronauts there, and charged NASA for seats on its rockets. The loss of this monopoly represents a significant shortfall for the Russian space program.

The exchange of astronauts this year, which must be renewed in the future, is done without financial compensation.< /p>