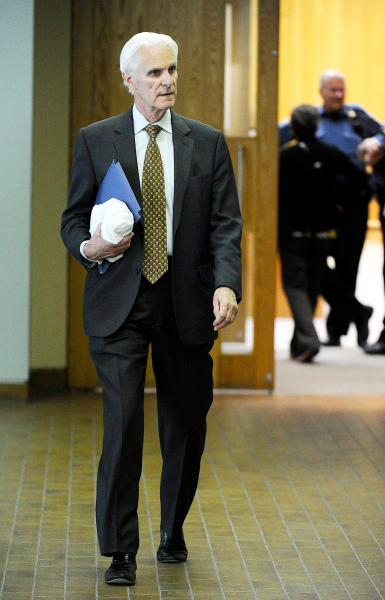 The pathologist's “negligence” in the case of ex-judge Jacques Delisle is not sufficient to drop the charge of premeditated murder, argues the Crown, which is calling for a new trial in this case.

The Court of appeal will now have to determine whether the Superior Court erred in finding that the state pathologist exercised “unacceptable negligence” in this case.

The court of first instance criticized this expert for not having sufficiently documented the angle of the shot and the trajectory of the bullet in the brain of the deceased, at the time of the autopsy.

These elements were important in defending Jacques Delisle, who maintains that his wife, Nicole Rainville, took her own life.

In its argument obtained last week at the Registry of the Court of Appeal, the DPCP believes that the State did not have “the obligation to determine the precise trajectory of the bullet” at the time of its investigation.< /p>

The trajectory is not an “essential element of the offense that the prosecution must prove beyond a reasonable doubt in order to obtain a conviction for the murder”, argue the four prosecutors in the case, adding that the State does not not have to investigate “all possible defenses”.

This proposition is “false and contrary to the evidence”, retort the lawyers of Jacques Delisle in their presentation made public yesterday.

They recall that “seven renowned pathologists” concluded that this autopsy was “inadequate”.

In addition, two Swiss experts retained by the public prosecutor with a view to a possible new trial would also have raised shortcomings in the work of this same pathologist, continue the criminal lawyers.

The DPCP also questioned the suicide thesis submitted by ex-judge Jacques Delisle to explain the death of his wife.

Only a “perfect succession of extraordinary events” would make this thesis “likely”, can we read.

Before even evaluating the question of the trajectory of the bullet, a possible jury should consider the unconventional way in which the weapon would have been held and operated, continues the public prosecutor, who considers that these two elements are inseparable.

Jacques Delisle should in particular convince a jury that his wife – a paralyzed right-hander on the right side – managed a “single shot” with her left hand, at a precise angle of 90 degrees, and this, while holding the weapon upside down , or the butt upwards. This requires activating the trigger with the edge of the middle finger.

The jury rejected this theory during the first trial, in 2012, recall the prosecutors. To which the defense replies that it is not up to the accused to make the suicide probable, but rather up to the prosecution to exclude the possibility.

No error, according to defense

Jacques Delisle's lawyers maintain that the Superior Court did not err and that this appeal must be dismissed. The DPCP affirms that it is up to a jury to decide the question of guilt.

Recall that Jacques Delisle was convicted in 2012 for the premeditated murder of his wife.

Claiming to be the victim of a miscarriage of justice, he addressed the federal Minister of Justice, who ordered a new trial, in April 2021. The octogenarian was able to regain his freedom, after nine years behind bars.

Last April, he benefited from a stay of proceedings. This decision is contested by the DPCP. The Court of Appeal is scheduled to hear the parties on November 22.