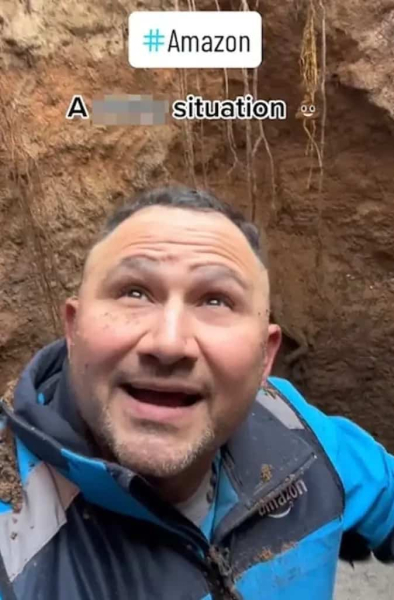 An Amazon delivery man had a shitty day last Thursday when he fell into a septic tank during his shift in Apple Valley, California.

Charles, or @dovahkiin0103, shared his story on video on TikTok.

He explains that he was trying to drop off a package when the ground collapsed under his weight, plunging him into a hole about 6 feet deep.

The man said he tried to grab hold of the dangling roots to pull him out, but was unsuccessful. It only created more dust.

The delivery man was eventually rescued by firefighters who pulled him out of the hole by throwing a ladder at him. An ambulance and even a helicopter were ready to intervene if necessary.

@dovahkiin0103 Walked past a hole while delivering to a customer's house when it collapsed and took me with it! #baddayatwork #amazondspdriver ♬ original sound – Charles Amicangel945

“The fire chief told me I was in a dangerous situation, and I probably didn't realize how dangerous it was, because when he arrived he said, 'Don't move,'” he said.

The Amazon employee went home to pick up a “little shower” after getting out of trouble and continuing his work day as normal.