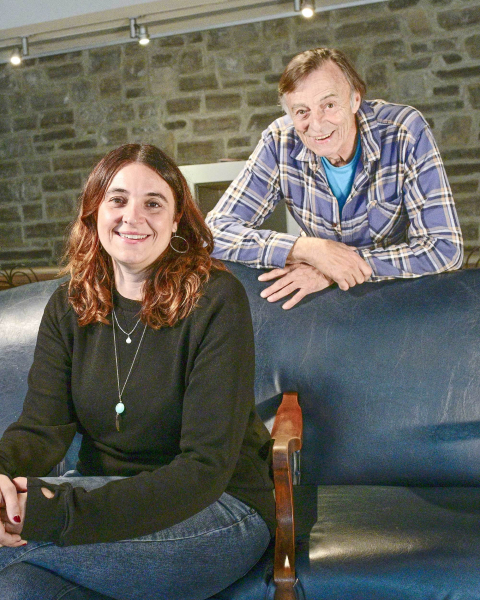 It won't be a family reunion, but almost. On September 27 and 28, Robert Lalonde and his daughter, Stéphanie Capistran-Lalonde, will meet on stage in a show-love letter to writer Virginia Woolf. An event and an unpublished text written by the 75-year-old author and read by his daughter as part of the 28th edition of the International Literature Festival ( THREAD).

A small sidewalk overlooking the abyss is not an appropriation of the work of Virginia Woolf by Robert Lalonde, quite the contrary.

“It's his vision, what Robert perceives from her and from the fact that it's happening today,” explains Stéphanie, who will be joining her father on stage here for the very first time. “It is not a desire to make an absolute portrait of this author whom he adores, rather to see if his words still resonate today. A declaration of love from a writer to a writer.”

It must be said that Robert Lalonde – a writer reputed to have a love for other writers – knows Virginia Woolf well, whom he affectionately nicknamed SA Virginia.

“I have a lot of admiration for his work and for his respect for the incoherence of life”, says the one who relies, as an author, on this kind of writers transgressing the rules.

“I like her talk about writing and the lives of women, art, the difficulty of continuing when you are considered an author who only writes little rose water stories by the men of her time. . I wondered: would his words resonate today? And I'm sad to think that things haven't changed so much, when we see that the practice of art has taken a back seat…»

For Stéphanie who, at the age of 42, has already accumulated 20 years of experience in the field of creation (assistant director, accompaniment of great playwrights, in addition to having her own creation company), speaking of women's literature in 2022 is essential.

“It is disturbing that the scope of Virginia Woolf's writings is still terribly relevant,” she says. She was very modern, funny and ironic and luckily she was able to count on the love of a man [Leonard] who accompanied her and did not feel diminished by her talent. His words now also affect men a lot. It makes me happy to tackle these themes and to do this for the first time on stage with my father. It's very exciting!”

Interestingly, Virginia Woolf, one of the first feminist writers, was also the favorite author of the late Marie-Claire Blais, to whom the WIRE honors this year.

The duo will be on stage with the actresses Johanne Haberlin and Bénédicte Décary, as well as Joseph Marchand on the music.