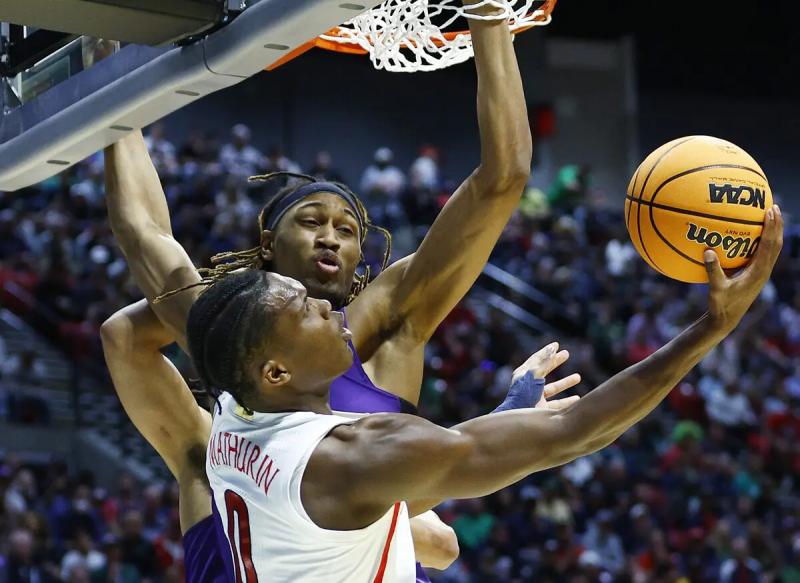 Jennifer Mathurin, big sister to Bennedict, could hardly be better placed to guide her younger brother to the heights of the NBA.

“My big sister guided me so that I could be successful, she did several things to help me have confidence”, recognizes the Quebecer who will logically be drafted in the first round, Thursday, at the Barclays Center in Brooklyn.< /p>

The 29-year-old former basketball player also reveals that she will officially leave her position on the coaching staff of the women's team at Bishop's University to join the bodyguard of her brother, as a special advisor. This is a logical sequel to the dawn of the NBA draft. Ever since he was little, Benn has effectively followed in Jennifer's footsteps, both on and off the court.

“We have always been super close, my brothers and I, despite a good age difference, confides the big sister, during a generous telephone interview. We have many beautiful memories. I remember that my brothers were forced to come with me when I was playing basketball and training with the DJ Sports team, a civilian club in [the neighborhood of] Little Burgundy. They were very young and we left Montreal North, often by public transport, to get there. They did not have a choice. I was their babysitter.”

Referring to her brothers, Jennifer is obviously referring to Bennedict, who is almost 10 years old younger than her, but also of Dominique, who was the middle child. The latter was 15 when, on September 30, 2014, he tragically lost his life in a bicycle accident.

“Dominique died more than seven years ago and since then I have taken advantage of every day thinking of him, noted the future NBA player last week, during an availability offered to the media with the main hopes. He's the reason I keep going, he explains why I want to be the best at what I do.”

Politely, the big sister prefers not to return to the circumstances of the accident. Hit by a car, Dominique suffered a serious head injury, then died the next day. Naturally, Jennifer rather likes to remember those training sessions in Little Burgundy where the coach let the little Mathurin brothers play on the field from time to time.

“Sometimes, I also had to bring my brothers to the park when we went for a walk with my “gang” of girls, also remembers Jennifer, laughing. They didn't understand why they were still with me.”

However, the Mathurin family was raised by a single mother, Elvie Jeune. Very often, she had to work to support the family. Jennifer thus watched over the brothers.

“Take advantage of the opportunities”

On the sporting level, Jenn Mathurin will also have cleared the ground before Bennedict. She also played in the NCAA, with North Carolina State University (NC State), for four seasons, from 2013 to 2017. She then played professionally in Luxembourg, Finland and Australia.

“Since Montreal North, I had no landmarks, I did not know any girl who, before me, had left there to play in the NCAA, neither in Europe nor in Australia”, she says, about her own journey.

To her brother Bennedict, who played for the University of Arizona Wildcats for two seasons, she offers the same advice she served until most recently to young players at Bishop's University.

“We have to take 100% of the opportunities we have in front of us,” she says.

With these words, it's hard not to draw a link with Dominique's death. Seizing the moment is what Jennier and Bennedict Mathurin will do on Thursday night at the NBA draft.

NBA Draft: Don't Compare Yourself to Others

In the context of the next NBA draft, where simulations and debates invade the media and social networks, Montrealer Bennedict Mathurin would do well to listen to his sister and, therefore, not read this text.

“Currently, I remind him of the importance of not comparing himself to others,” says Jennifer Mathurin. We must not forget that each one traces his own path.

Certainly, Jabari Smith Jr. will be selected before him, this Thursday in Brooklyn, he who is perceived as the first potential choice of the Orlando Magic. This will probably also be the case for Chet Holmgren, Jaden Ivey, Paolo Banchero and Keegan Murray. Will Mathurin be the first Canadian selected? The fight seems hot between him and Ontario's Shaedon Sharpe.

“It’s important to block out the noise around him right now, but I feel he’s focused,” sums up his sister. You can't waste energy on it, it's something you don't control.”

In addition to her own past as an athlete, Jennifer Mathurin took advantage of her time at North Carolina State University to complete a master's degree in social work. This training served her well when she found herself on the coaching staff of the women's basketball team at Bishop's University last season, but also previously at the Séminaire Saint-François, in the greater Quebec region.

“Often, in sport, you learn to always push your limits, but it's also important to take care of yourself, physically and mentally, then admit your limits”, explains Mathurin globally, serving as a warning to all athletes. who dream of a great sporting career.

That goes for everyone, not just Bennedict.

Main players fighting with Bennedict Mathurin (in alphabetical order of last name). They are among those who will accompany the Quebecer in the “green room” reserved for the best prospects during the NBA draft on Thursday: