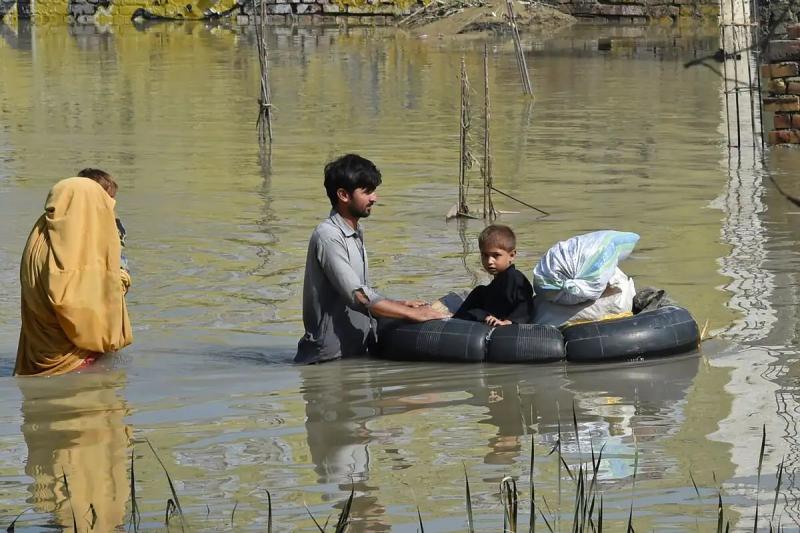 SUKKUR | Tens of millions of Pakistanis were battling the worst monsoon rains in three decades on Monday, which killed at least 1,136 people, washed away countless homes and destroyed vital farmland.

< p>A third of Pakistan is currently “under water”, Climate Change Minister Sherry Rehman told AFP in an interview, referring to a “crisis of unimaginable proportions”.

The rains monsoon storms, which began in June, are “unprecedented for 30 years,” Prime Minister Shehbaz Sharif said Monday as he toured the affected northern regions.

A huge relief operation was underway in the country, where international aid was slowly starting to arrive, as the Indus, the country's main river, threatened to burst its banks.

Pakistani officials attribute the devastating weather to climate change, saying Pakistan is suffering the consequences of irresponsible environmental practices elsewhere in the world.

More than 33 million people, or one in seven Pakistanis, have been affected by the floods and nearly a million homes have been destroyed or severely damaged, according to the government.

According to the latest report Monday from the National Disaster Management Authority (NDMA), at least 1,061 people have been killed since the monsoon began in June, with 28 dying in the past 24 hours.

But the authorities were still trying to reach isolated villages located in mountainous areas in the north of the country, which could further increase the toll.

“Not everything is than a big ocean, there is no dry place to pump the water from,” Ms. Rehman said, adding that the economic cost, which has not yet been quantified, would be devastating. p>

The monsoon, which usually lasts from June to September, is essential for the irrigation of plantations and to replenish the water resources of the Indian subcontinent. But it also brings its share of drama and destruction every year.

The consequences of climate change

According to Ms. Rehman, these bad weather are even worse than those of 2010, when 2,000 people were killed and almost a fifth of the country submerged monsoon rains.

Those displaced by the floods have found shelter in hastily established makeshift camps across the country.

“Life here is miserable. Our self-respect is at stake,” Fazal e Malik, sheltered with around 2,500 other people on the grounds of a school in Nowshera, in Khyber Pakhtunkhwa province (northwest), told AFP. p>

“I stink, but there is no place to take a shower. There are no fans,” he added.

The country received twice as much rainfall as usual, according to the weather service. In the most affected southern provinces (Balochistan and Sind), rains were more than four times the average for the past 30 years.

Near Sukkur, Sind, where a towering colonial-era dam on the Indus River is vital to prevent the disaster from getting worse, one farmer lamented seeing his rice fields lost.

“Our plantations spanned 2 000 hectares, on which the best quality rice was sown and eaten by you and us,” Khalil Ahmed, 70, told AFP. “It's all over.”

The head of the dam assured that the bulk of the water flowing from the north of the country should reach the structure around September 5, but said he was confident in its ability to withstand the shock.

The dam diverts the waters of the Indus to thousands of miles of canals that make up one of the largest irrigation networks in the world. But the farms thus served are now completely flooded.

The NDMA said more than 80,000 hectares of farmland had been devastated, and more than 3,400 kilometers of roads and 157 bridges washed away.

Water is hampering relief operations under the supervision of the Pakistani army.

The government has declared a state of emergency and called for help from the international community. On Sunday, the first flights bringing humanitarian aid arrived, from Turkey or the United Arab Emirates.

These floods come at the worst time for Pakistan, whose economy was already in crisis.

The International Monetary Fund was to meet Monday in Washington to agree to the resumption of a loan program of 6 billion dollars, essential for the country. But it is already clear that Pakistan will need much more to rebuild the infrastructure destroyed by the floods.

Prices of staple foods are soaring and supply problems are already being felt in the provinces of Sindh and Punjab.