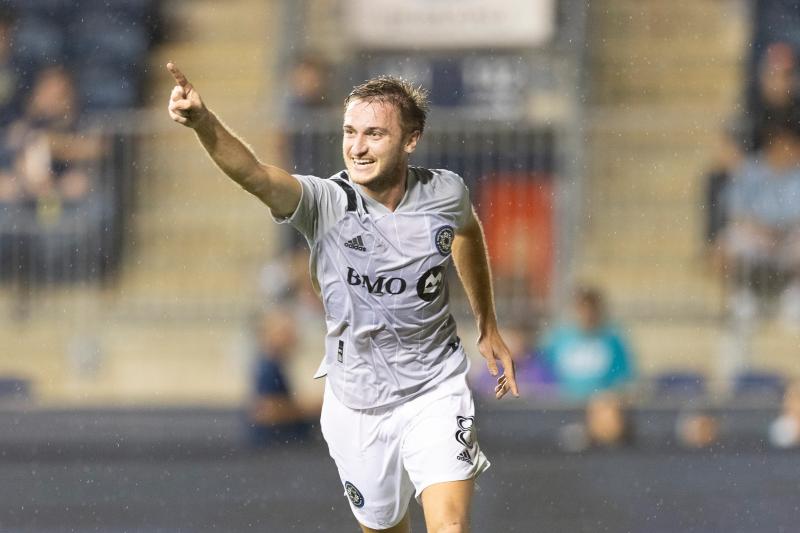 It is well known that duels between CF Montreal and Toronto FC always give rise to sparks. On Sunday, the fans gathered at BMO Field were treated to more of a bonfire, as the Montreal team triumphed 4 to 3.

Emotions, physical play and goals, lots of goals: this is the recipe for a successful derby between two sworn enemies. What's more, the stakes were high for the visitors, who dealt a blow to the Torontonians in their quest to make the Major League Soccer (MLS) qualifiers.

Wilfried Nancy's men have showed, once again, their ineffable perseverance on the road after experiencing the worst start to the game imaginable. In doing so, they took their tally to 52 points, eclipsing a team record from 2015 (51).

Down by two goals after seven short minutes, CF Montreal readjusted, calming the game in front of a Toronto FC incredulous to see its lead melt like snow in the sun.

Kamal Miller got the ball rolling in the 19th minute, taking advantage of a throwback from Kei Kamara. Maneuvering skillfully at the edge of the penalty area, the Montrealers obsessed the Toronto defense and took advantage of a breach to open their counter.

A man of special occasions, Kamara was one of the most important craftsmen of the comeback. He gave his side the lead just before the end of the first half, winning his duel against Chris Mavinga and slipping the ball between the legs of Alex Bono.

The third MLS's all-time top scorer was an accomplice in the winning net too. He redirected a perfect cross from Romell Quioto in the direction of Alistair Johnston with a header, and the Canadian defender did not ask for more to thread the needle.

Before that, Djordje Mihailovic had shown his fine form to create the tie. His powerful shot, several strides from the penalty area, gave Bono no chance, silencing the Toronto home.

Minutes from the final whistle, Lorenzo Insigne hit the target to the second time in the game. The Italian international did not even celebrate his success, aware that the outcome of the match was already sealed.

Before Getting back to his feet, the Bleu-Blanc-Noir looked like a tourist on the lawn of Toronto FC.

Quebecer Samuel Piette struggled particularly in the first few minutes. He first opened the door to Toronto's first net by committing a foul in the penalty area. The video replay sent Federico Bernardeschi to the penalty spot, and the former Juventus player didn't miss his chance.

Piette deflected a cross directly at Insigne's foot two minutes later late, and the small forward made it 2-0 with a spectacular volley.

CF Montreal will return to their home on Friday, to host the Columbus Crew.