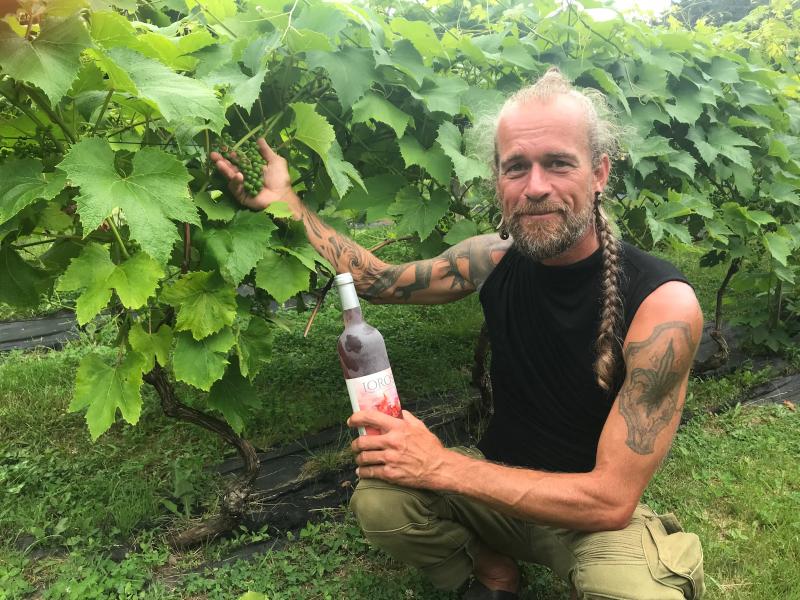 Four years after bottling the first red wine produced in the Magdalen Islands, winemaker Laurence-Olivier Brossard is finally satisfied with the degree of maturity of his nectar.

He describes this red, baptized Beausoleil, as a good wine for laying down, with its pink pepper color and its taste of grapes and cherries.

“We aged it for 10 months in oak barrels and it improves year after year,” says Mr. Brossard. Eventually, with the new oak barrel from Allier [department in central France] that I will soon be receiving – the crème de la crème of barrels – it will also taste like toasted almonds.”

< p>The Domaine des Salanges, a family business, began to take shape in 2004 when, at the instigation of his father André Brossard and encouraged by all his family, Laurence-Olivier undertook to clear four hectares of forest on La Montagne , on Île-du-Havre-Aubert. He chose a valley sheltered from the wind, with rocky soil to promote the flow of water.

“I want to run out of water so the vine will sink its roots deeper into the mineral-rich clay crust. This is where we can talk about terroir. The terroir is the mineral side of wine”, he teaches us.

A year of training in Burgundy, France, in order to learn his new profession, led Mr. Brossard to opt for an Estonian grape variety, Baltica, for its seaside vineyard.

“It's an ultra-early vine, one of the few capable of maturing on the Islands, where we have a month of less good temperature in terms of accumulated degrees/heat,” he explains. We are surely one of the vineyards with the fewest hours of sunshine in the world. We have 950 hours, compared to Europe, where we look for 1,200 hours to bring a Pinot Noir to maturity, for example.”

Against all odds, the Madelinot winemaker realized that the Baltic is more conducive to the production of rosé wine, a sector that he also decided to exploit successfully.

“He has red skin and white flesh,” he says. This means that it is in a hurry right away and it gives the rosé. It is when it is macerated with the skin that it gives red. And to see what is profitable for the wine is not to control it and try to give it a taste. It is rather to accompany it according to its grape variety. And this variety is really perfect for rosé. With its super beautiful aromas, we are really on the fruit, from residual sugar to its strict minimum.”

A dark rosé with aromas of pomegranate and watermelon, the Lorose has thus become the flagship product of Domaine des Salanges.

A more diversified production on the horizon

Domaine des Salanges is not limited to traditional reds and rosés. He also relies on his Margoulette, a fortified red wine. A fortified rosé is also in the making.

“With the Margoulette, which is a blend with a 12-year-old brandy and an additional aging of five years, including two in oak barrels outside, we really have a good alcohol/sugar level accord, says Laurence- Oliver Brossard. Just like for the rosé, I try to sweeten my fortified wine as little as possible.”

The winegrower from the Islands also promises us a sparkling rosé, the Libelbulle, for the future. In addition, two white grape varieties, Solaris of Swedish origin intended for another sparkling wine, as well as Muscat de Bellechasse, in the Quebec region, will be vinified in 2025-2027.

Products derived from winemaking residues are also being considered, such as a grape syrup made from Baltica moult and a contribution of pressed grape marc, for the development of a new drink in collaboration with the Madelinan microbrewery À l' shelter from the storm.

The Islands, a promised land for winemaker Laurence-Olivier Brossard

“I have found my Vineland, my promised land”, summarizes the man who produces 320 bottles of red and nearly a thousand rosés annually, with 7,000 Baltica plants. As for his 2000 white grape plants, we will have to wait until they are vinified to know the extent of their yield.

“We will never be found at the SAQ, warns Mr. Brossard, because 'we don't have a large enough quantity to supply. And I want people to be able to come on site to discover this little gem.”

In fact, the Madelinot winemaker points out that the summer of 2022 is marked by the official opening of the Domaine des Salanges boutique and the offer of guided tours.

“With wine production, kiosk sales and tours, it can become profitable! The only limit is to keep it healthy, artisanal, concludes Laurence-Olivier. Here, everything is done by hand. And, with one or two people working to maintain the vineyard, it's an impressive workload. That's 10-12 hours a day, six to seven days a week, from snowmelt to harvest in early October.”