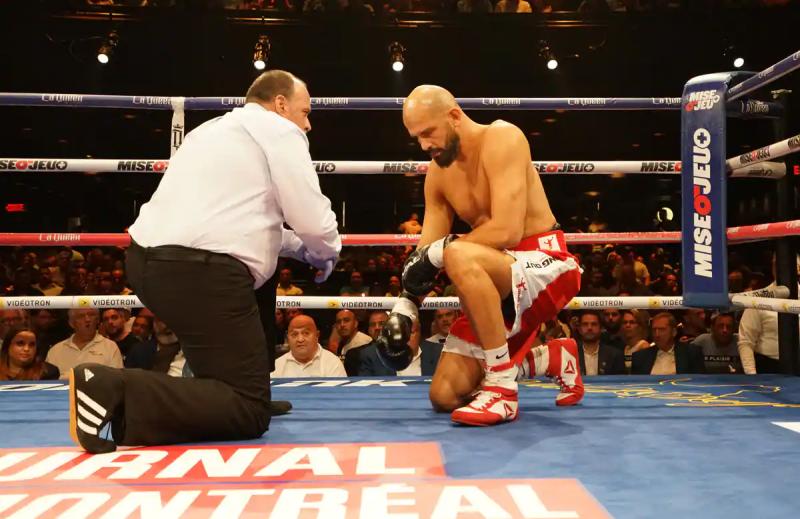 Camille Estephan didn't mince words about Newfel Ouatah, who caused a real commotion at the Casino de Montreal on Friday by refusing to fight Simon Kean.

The images have gone around the boxing world: at the sound of the bell, when the fight was to begin, the Franco-Algerian put one knee on the ground, one fist in the air . Obviously, the referee immediately put an end to the fight. Ouatah then explained that it was a matter of “contestation” and “insurance”.

A journalist from the French channel RMC Sports later obtained an email from the French Boxing Federation sent to Ouatah stating that he did not have the authorization to fight and that she released herself from any responsibility.

However, Ouatah could have done things differently. Estephan notably visited him in the locker room before the fight and the pugilist decided to remain silent. The promoter, visibly frustrated with the situation, was quick to return to it after the abandonment.

“I wanted to know more. I was really in shock, confessed Estephan at the end of the gala. He had no explanation. I think he was scared – it's human – I don't know. Honestly, that pisses me off. Me, I won't pay it. There is not much [to add].”

The president of Eye of the Tiger Management (EOTTM) however revealed that regardless of the outcome of this fight, the medical expenses of either boxer would have been covered by his own insurance. This is particularly what happened with Nadjib Mohammedi, who had to go to a hospital center after suffering the K.-O. in front of Christian Mbilli, on March 26.

“All the costs, I paid them, argued the promoter. We have insurance and we pay. So there was no [valid] excuse. That's an excuse from a scab. He should be embarrassed. This is inappropriate. In addition, it was broadcast live on RMC Media at home [in France]. It will follow him all his life.”

Consternation reigned after the events at the Cabaret du Casino de Montréal. It must be said that few fights ended in this way. Admittedly, boxers sometimes fall very quickly after a first blow, but an abandonment before the fight has even started remains very rare.

A rare example quickly comes to mind. In 2018, Curtis Harper was disqualified after leaving the ring facing Efe Ajagba when starting the fight. In his case, it was a contract story.

“We were warming up, said Mbilli about this situation. We said to ourselves that we still had a fight in front of us, and I see that… He puts the knee on the ground. We didn't understand. We were all surprised. I do not know what to say. […] I've never seen that.”

Now, Estephan will probably have some damage mitigation work to do since the scene was broadcast on ESPN. Luckily for him, Mbilli delivered the goods in the final.