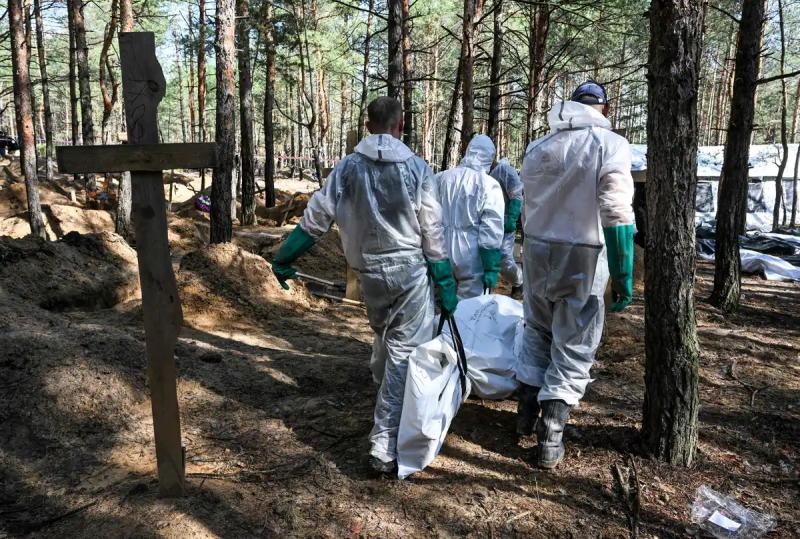 In Kupiansk, Izium, Balakliïa, in eastern Ukraine, towns newly reconquered by Ukrainian forces, stories of arbitrary detentions and torture by the occupiers come to light.

In Izioum hospital, Mykhaïlo Tchindeï, 67, has recently started walking again. His arm in plaster and in a sling is a painful memory of the Russian presence in town. he to AFP. “There were Russian soldiers in there and there were a lot of dead and wounded,” he said.

After this bombardment, the Russians arrested Mr. Chindei accusing him of “giving the coordinates of the school to the Ukrainian forces”. They wanted to know where the Ukrainian troops were and if he had communicated with them.

“They put a bag over my head and took me away (…) when I I could see, I recognized the place, it was the Izioum police station,” he said.

In this three-storey building, also affected by the bombardments, Mr. Chindei shows AFP the five-by-five-meter cell where he was held for 12 days before the arrival of Ukrainian troops.

There were up to eight of them in that cell in a damp basement, he says. He found, hanging on the wall, a scrap of his jacket that he had used as a bandage.

“On the second day, they broke my arm. One person held my hand and another hit my arm with a metal bar. They beat me for two hours almost every day. I lost consciousness several times,” he says.

“They beat my heels, back, legs and kidneys,” adds Mr. Chindei.

In the basement of the building, other detainees were kept in a dozen of cells spread over two levels. “I saw about 15 people,” he explains, “no one left without being hit.”

“I could hear people screaming 24 hours a day, seven days a week,” the man said. A female detainee not far from his cell was screaming “very loudly”, he said. According to him, at least one man died in this basement.

On the ground floor of the police station, a young officer, who came from Kharkiv to investigate possible crimes of war, begins to write his report in one of the offices where there is a great mess: files on the floor, broken chairs, upturned furniture.

“We have a lot of work to do,” says the man who refuses to give his name. “Investigators must check everything, even fingerprints,” he said, in order to compare them to those found “in Boutcha (near Kyiv, editor’s note) or in other places where war crimes took place”.

According to him, the alleged cases of torture will be reviewed by investigators who arrived in Izium on Sunday.

In one room, more than a hundred Ukrainian passports lie on on the floor, on an old sofa and on a desk.

A few dozen kilometers away, in Kupyansk, Maryna Mikhaïlytchenko, 32, hurries on the street. Panicked, she tries to find a way to escape the incessant bombardments around the city.

Arrested during the Russian occupation, she spent a week in prison in the summer. “My brother is in the Ukrainian army,” she says to explain her arrest, adding that she was not tortured.

A little further in the partially destroyed town, a volunteer who goes by the nickname “Bronik” explains to AFP that according to him, “the police detained and tortured those who had fought in the army since 2014, and the pro- Ukrainians”.

“I don't know if people died from torture. But there were people who were physically injured. With broken hands,” the man said. reports of arrests and torture in eastern Ukraine after the departure of the Russians ” />

In Balakliïa, in the same region, Viktor Priliepov, 68, says that he was held for three days at the police station by the Russian occupiers.< /p>

“They took me there with a bag over my head and locked me in a cell,” he said. Asked in particular about his son who serves in the Ukrainian army, he was not mistreated because, according to him, of his “health problems”. But others were less fortunate than him and were “beaten”, he says.

On Friday, Ukrainian national police chief Igor Klymenko announced the discovery of “a at least ten torture chambers in localities in the Kharkiv region”.