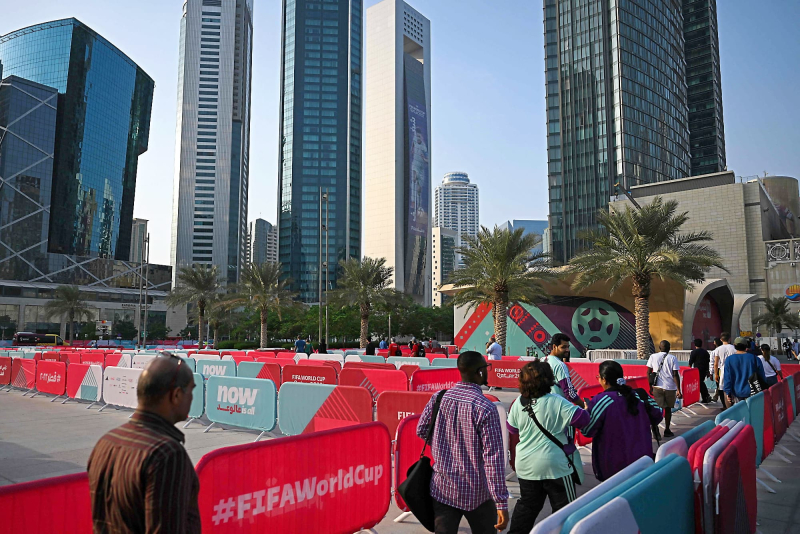 DOHA, Qatar | Thanks to a more than prosperous natural gas industry – Qatar is the world's fifth largest producer – Doha is swimming in money, and it shows.

You can see it from the moment you arrive at the superb Hamad International Airport. Here, everything is clean and beautiful.

Opened in 2014 and built at a cost of 21.4 billion Canadian dollars, the airport sparkles inside and out. The ceramics are of obvious quality, everything is clean and the shops are flashy.

The infrastructure, although a bit cold by nature, is still very impressive in terms of its quality.

This impression of luxury and perfection continues in the metro, inaugurated in 2019 and whose construction costs flirt with 48 billion Canadian dollars.

The Doha metro is brand new and is immaculate, although not very busy. by the townspeople.

There are more than thirty stations and the network, which currently has three lines, is not yet complete. A fourth row will be added by 2028.

The stations are understated, but clearly made of premium materials. The network, which currently covers 76 kilometres, is fully automated and air-conditioned.

On board, it's all about comfort. With once again rich materials, including floors with an imitation wood finish. And on the gold line, there are even “premium” seats reminiscent of those in our cinemas.

At first glance, the event was meticulously planned by the organizing committee.

In some busier metro stations, one entrance is used to let passengers in and another to let them out, so there is never any congestion.

Around Souq Waqif, a very popular destination , there are security guards everywhere to direct people and attendants with megaphones to direct traffic. It is a major transport hub with many shuttles and it is virtually impossible to miss your bus.

On the subway, attendants are everywhere to help travelers by directing them to the right subway line and leading them in the right direction.

Since five of the eight stadiums are accessible by subway, the one it will be busy on game days. But Sunday, it was rather deserted. It must be said that in Qatar, it is the culture of the car before that of public transport.

For the other stadiums, there is a very efficient shuttle service to transport supporters.

However, we are going to put a big downside on accessibility to Al-Bayt Stadium for the first match of the competition.

Already, it is farthest stadium from the city center and we had a one-hour bus ride.

And once the stadium was in sight, it took almost another hour to get there. to reach and be able to get off the bus.

It was a complete mess on the roads surrounding the stadium. Hundreds of buses carrying supporters and members of the media fought for every inch of tarmac while VIP cars escorted by police also tried to make their way through this real highway mess.

It wasn't much better after the meeting, because we had to wait almost an hour for the first buses to arrive to take us back to town.

Doha knows how to celebrate. And it stays up late, due to the heat. After 11 p.m., the restaurant terraces are still full. And a funny little detail with the eyes of Quebecers, despite a very comfortable 22°C, some locals wear earmuffs to beat the “cold”.

The atmosphere is festive in Doha in view of the start of world Cup.

Saturday evening, we kicked off the festivities at the Fan Festival with fireworks and projections. The thousands of supporters present on site animated the evening for several hours.

The place sits in the heart of an urban park that borders the Corniche, a scenic road that follows a bay that separates Doha's old town from the newer, glitzier financial district.

The celebrations were launched and they were quite palpable elsewhere in town.

The Souq on fire

The atmosphere was at its height at the Souq Waqif, with supporters of all countries. Fans from the Arab world were particularly vocal.

The Tunisians sang and danced by the dozens for more than an hour in the large square at the entrance to the Souq with, in the background, temporary television studios.

Further on, the Moroccans were less numerous, but just as much in voice. They made the rounds of their songs for a film crew who certainly did not ask for as much.

For a few days, there has been talk of “false supporters” who have come from Pakistan, in particular, to create a false impression of partisanship in Qatar.

Tunisia supporters had a blast with many songs for a good hour at the Souq on Saturday night.

We can guarantee you that the fans we met at the Souq on Saturday night were very real. No Pakistani could have put on all the Arabic songs that the Tunisians and Moroccans sang.

And above all, the few Moroccans with whom we spoke briefly spoke a little French. Not sure that would have been the case if it had been “fake supporters”.

And as we traveled Saturday and Sunday, we passed supporters from various countries sporting their colors, and just by listening to them talk, it was obvious they were from where they claimed to be from.

Call of the Souq

The Souq Waqif is located in the heart of the old city and it is an unmissable experience.

You find yourself immersed in an atmosphere crazy woman. Thousands of supporters are there and animate the evening. We will tell you about it in another text.

In this old market that comes out of another era, you get lost in the small narrow streets that are full of shops of all kinds.

The aisles are overflowing with spices, dried lemons, sweets, but also pet stores, souvenirs and crafts that we hope are local.

Everywhere, it smells of spices, herbs, perfume and grilled meats, because there are a crazy number of restaurants from all walks of life with menus more enticing than each other.