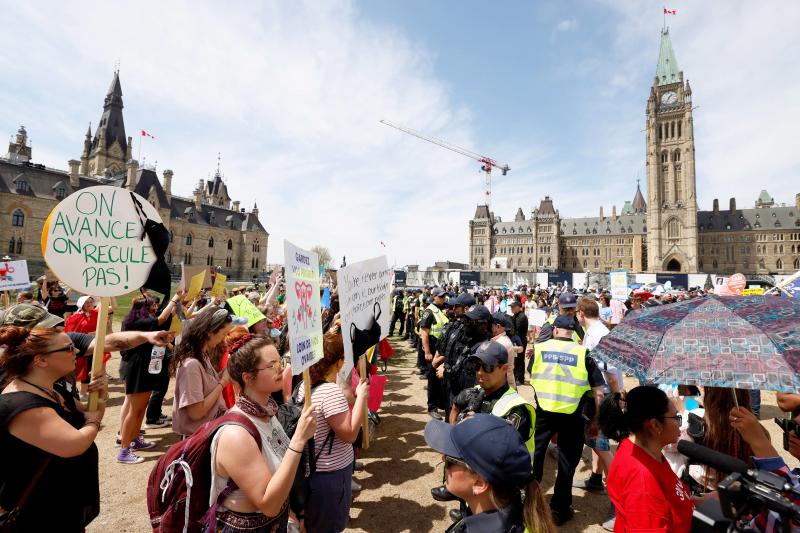 Anti-abortion activists and conspiracy theorists across Quebec have taken advantage of the health crisis to get closer, both online and on the ground.

“It's interesting to see those links. In the end, we are not very far from misinforming about COVID or abortion, ”observes Véronique Pronovost, a doctoral student in sociology who is interested in anti-abortion groups.

You should know that the conspiracy movement has among its ranks a “spiritual and religious” branch, according to an analysis by a center of expertise on radicalization.

“Pro-lifers are used to being ostracized for their point of view, then one would expect them to be the first to denounce a new scam,” says Georges Buscemi, president of the Christian and anti-abortion organization Campagne Québec-Vie.

The COVID vaccine is particularly in the sights of organizations like his, who point out that it was created from cells of an aborted fetus in the 1970s.

The Science Agency- However, Press specifies that it is the distant descendants of these cells, grown in the laboratory, which are used in many drugs and vaccines today. Even the Vatican has assured that it is morally acceptable for Catholics to get vaccinated.

Despite his aversion to the vaccine, Georges Buscemi, president of Campagne Québec-Vie, insists that his organization has never officially taken part in the demonstrations against health measures.

“But several of our acquaintances and I -even we participated in a personal capacity”, he specifies, dissociating himself from the libertarian fringe of the conspiracy movement. The latter has, among other things, appropriated the pro-choice slogan “My body, my choice”, to protest against the vaccine passport.

But they are also leading figures of the conspiracy movement who publicly question the voluntary termination of pregnancy.

André Pitre, who relays conspiracy theories, has already conducted an interview with Georges Buscemi for ” refute each and every pro-abortion argument in turn,” reads the description of the video, which has been removed from YouTube.

Mr. Pitre’s studio has also used to film pro-life capsules in the past.

Amélie Paul, another member of the conspiratorial movement, also suggested that pregnant women give their babies up for adoption rather than abort, in a recent tweet.

“Many people sterile [because of the vaccine [against COVID] will desperately need easy and affordable access to adoption!”, she justifies herself, citing information that has been denied many times. interview and Mr. Pitre did not follow up.

If these rapprochements between opponents of health measures and abortion are also present in France or the United States, researcher Véronique Pronovost believes that it will be necessary to better study the phenomenon in Quebec.

You have a scoop for us to transmit?