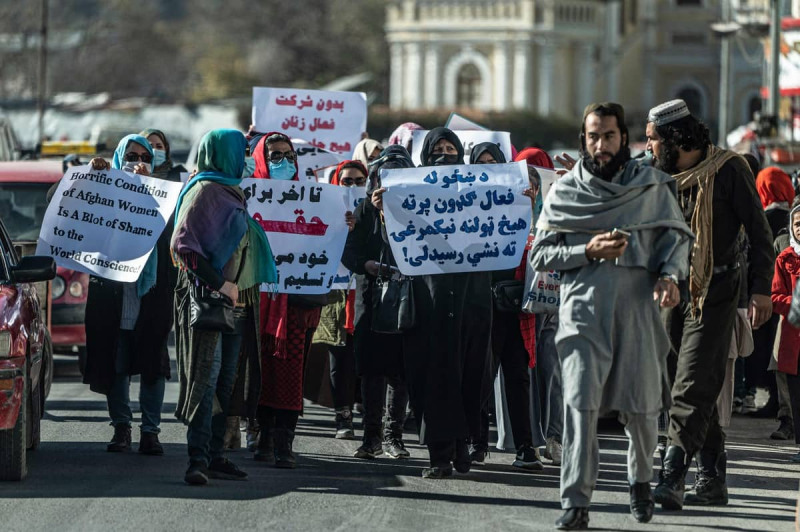 Fifteen Afghan women briefly demonstrated in Kabul to defend “their rights, to the end” on Thursday, the eve of the International Day for the Elimination of Violence Against Women, noted journalists from AFP.

Wearing mostly black sunglasses, their heads covered with a veil and a surgical mask obscuring their lower faces, the protesters began their march outside a mosque in downtown Kabul. Taliban patrolled in cars bearing the logo of the intelligence services and others strolled, armed, in the street in front of the small group of women.

“We will fight for our rights until the end, and we will not capitulate”, could we read in Dari on one of the signs held up by a participant. “America and the West have betrayed Afghan women,” another poster lamented.

“The horrible condition of Afghan women is a disgrace to the conscience of the world!” read on another in English.

Since the Taliban regained power in August 2021, following the departure after 20 years of war of American troops, the women's demonstrations, which bring together rarely more than forty people, have become risky. Many protesters were arrested.

The Taliban imposed an ultra-rigorous interpretation of Islam and gradually introduced increasingly strict rules, in particular very severely restricting the rights and freedoms of women.

Secondary schools for girls have been closed. Women civil servants are excluded from most public jobs or paid a pittance to stay at home. Women are also prevented from traveling alone outside their town and must wear a full-face veil.

The Taliban also announced in November that they were no longer allowed to visit Kabul's parks and gardens, but also gymnasiums or public baths.

According to the UN, which is organizing the International Day for the Elimination of Violence against Women on Friday, violence against against women and girls remains the most pervasive and pervasive human rights violation in the world. It is estimated to affect 1 in 3 women. A figure that has remained largely unchanged over the past ten years, notes the organization.