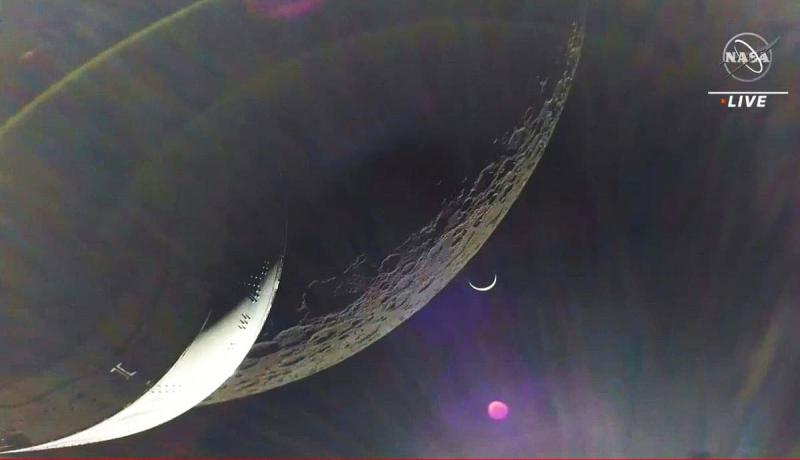 NASA's Orion space capsule completed a flyby of the Moon less than 130 kilometers from its surface on Monday, a spectacular maneuver that marks the start of the return journey to Earth for this first mission of the Artemis program.< /p>

By performing this flyby very close to the surface, the spacecraft took advantage of the gravitational pull of the Moon to propel itself on its return trajectory.

Communication with the capsule was interrupted for 30 minutes when it passed behind the far side of the Moon. It was also to fly over the landing sites of Apollo missions.

The essential thrust of the main engine of the European service module, which propels the capsule, lasted a little more than three minutes. < /p>

It was the last big maneuver of the mission. The latter began with the liftoff of NASA's new mega-rocket on November 16, for a journey that should last 25 and a half days in total.

Orion will now only make minor corrections of trajectory until its landing in the Pacific Ocean, off the American city of San Diego, Sunday December 11 at 17:40 GMT. She will be recovered and hoisted aboard a US Navy vessel.

During the mission, Orion spent approximately six days in a remote orbit around the Moon.

A week ago, this brand new spacecraft broke the distance record for a habitable capsule, venturing just over 432,000 km from our planet – farther than the Apollo missions.

The capsule does not carry a passenger, the purpose of this Artemis 1 mission being to verify that the vehicle is safe for a future crew.

The main objective is to test the resistance of the heat shield of Orion – the largest ever built – when it enters the Earth's atmosphere at a speed of 40,000 km/h. It will have to withstand a temperature half as hot as the surface of the Sun (2800°C).

With the Artemis program, the Americans intend to establish a lasting presence on the Moon, in order to prepare for a trip to Mars .

The Artemis 2 mission will take astronauts to the Moon, still without landing there. This honor will be reserved for the crew of Artemis 3, which will land for the first time on the south pole of the Moon. Officially, these missions are to take place in 2024 and 2025, respectively.