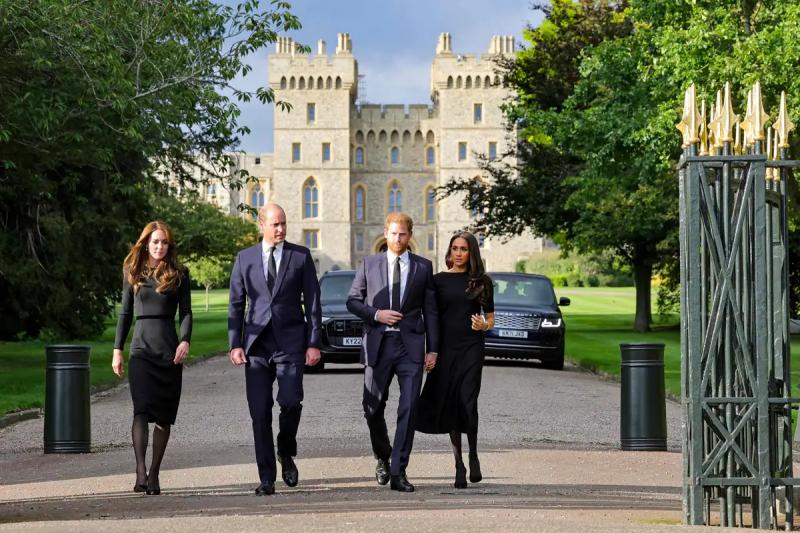 Will the death of the queen be an occasion to bury the hatchet? The symbolic appearance on Saturday of Prince Harry and his wife Meghan alongside Kate and William, heir to the crown, raises the fragile hope of a reconciliation within a bereaved, but divided royal family.

However, it had started badly. Photos showed Prince Harry, 37, alone in his car and with watery eyes on Thursday evening as he arrived at Scotland's Balmoral Castle: His family hadn't waited for him or to take off hours earlier in a jet from the Royal Air Force — hoping to reach the queen's bedside in time — nor to officially reveal his death 1h30 earlier.

Far from the iconic photo of Harry and his eldest William gathered behind the coffin of their mother Diana in 1997, this snapshot said “the obvious distance” of the two brothers, estimates with AFP the royal expert Richard Fitzwilliams.

However, two days later, the two brothers created the surprise, by meditating together, with their wives Meghan and Kate, in front of the flowers placed in memory of the queen at the castle of Windsor.

With this unexpected exit, they stole the show from their father Charles III, officially proclaimed king a few hours earlier. “All 4 One”, thus titles The Sun in its Sunday edition, preferring for its front page an image of young couples rather than that of the 73-year-old monarch.

Nicknamed for a time “the fantastic four”, William, Harry, Kate and Meghan had not appeared publicly together since March 9, 2020, as they had been known to be cold for two years.

No Meghan at Balmoral

The quarrel began with the resounding withdrawal of the couple from the monarchy in 2020, determined to leave the country for the United States in the face of harassment from the British tabloids against Meghan.

< p>But the break was really consummated in March 2021, when the “Sussex” confided in an explosive interview on American television that Kate had made Meghan cry and accused the royal family of racism. A great unpacking far from the usual reserve of the “Firm”.

Since then, Prince Harry has had a strained relationship with his father, now King Charles III, and his brother. Other outings – such as the long interview at the end of August in The Cut magazine, where Meghan warns the monarchy that she is “free to say what she wants” – regularly rekindle the wounds.

Faced with the declining state of health of the queen, a spokesperson for the couple, who were in London for a charity event, had announced that they would go to Scotland as soon as possible. But a few hours later, it was Harry alone who landed there, his wife waiting in Windsor.

An unnamed source claims in the British tabloid The Sun that Charles III told Harry on the phone “that it was neither right nor appropriate for Meghan to come to Balmoral at such a sad time”. Others attribute this change to the fact that Kate, future queen, had decided to stay in Windsor.

But Charles III created a surprise that very evening, speaking directly to his youngest son and his wife in his very first address as king, sending them all his “love as they continue to build their lives abroad”.

“He offered them an olive branch,” says Mr Fitzwilliams, deeming this “direct reference” to Harry and Meghan “very interesting”, “because it put the ball in their camp”.

Very popular with young people, Harry and Meghan would however have “a lot to lose” if they continued to openly criticize the monarchy, even risking, according to the expert, being let go by their American supporters.

In these times of national mourning, “there is no doubt that the actions of the Sussexes will be scrutinized” by the public, he adds, believing that the couple “will obviously attend the funeral” of the queen, even if nothing has been confirmed.

The joint walkabout of the two brothers and their wives on Saturday afternoon in front of Windsor, highly symbolic, accredits the hypothesis according to which the British royal family now hopes to offer world a united front.

However, this hope remains fragile and the olive branch offered by Charles III is offered with “great caution”, believes Mr. Fitzwilliams, because “it knows that (the Sussexes) are unpredictable.”

The monarchy fears that Harry's book, which must t be published by the end of the year, does not contain settling of scores and revelations. But “if Harry stops being critical in his memoirs, then it's different”, he judges, “It's up to them”.