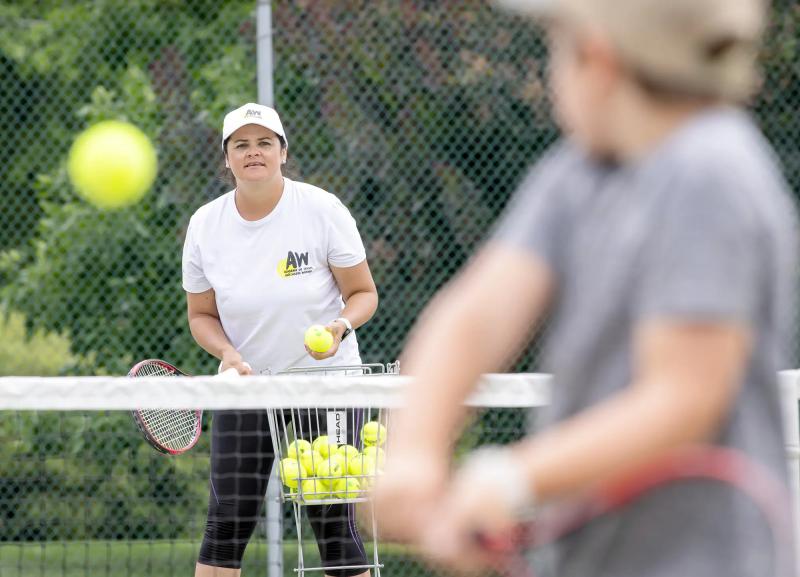 “It's an impossible dream. This murderous sentence, Aleksandra Wozniak heard it many times young, when she mentioned her desire to play on the WTA. Inducted into the Tennis Canada Hall of Fame on Tuesday evening in Montreal, the Quebecer can now boast of having achieved “the impossible”, and more.

“Financially , we had a certain level of poverty at home”, recently told the Journal the former player, met near her tennis academy in Bedford, in Estrie.

“Both my parents worked overtime, my father took a job at night to be able to meet the expenses related to tennis,” she explained.

Jadwiga worked in the assembly of electronic chips; Antoni, a soccer player in his native Poland, worked here in mechanics.

Aleksandra's eldest, Dorota, also played tennis. She was even multiple Canadian champion. It was with the latter that dad Wozniak got his hand in coaching.

“My dad used to take my sister to the tournament in Montreal,” Wozniak said. That's where it all started, our passion for tennis. My father wanted my sister to play, but he saw that the coaches were poorly supervised. So he started to coach her.”

“But he had never played! she added. I think what helped him was that he had played soccer. He had a knack for reading sports. He read about tennis, he watched videos. »

Wozniak owes much of his career to the sacrifices of his parents, who immigrated to Quebec there is almost 40 years old.

But she can attribute it to her own resilience too. Because, at the beginning of 2000, when “Aleks” took his first steps among the pros, Canadian tennis players did not benefit from the same coaching as today.

The Center national training did not exist. The financial support was far from what is given to recent generations. Her life in the highest spheres of women's tennis, Wozniak built it gropingly.

“At the very beginning, I was not supervised,” she explains. I did not have access to certified trainers. I was rejected, because my father did not have his coaching certification. But I was winning. »

Very young, Aleksandra attended the training sessions of her eldest. Her father, however, did not know if he wanted to start this demanding process over with the youngest.

But Antoni finally agreed. He even continued to advise Wozniak throughout his career — despite the hardships, like a cancer he had to battle.

Except that there is a difference between loving to play tennis and wanting to make a career out of it. This click, “Aleks” had it a little later, at what was formerly called the Omnium du Maurier de Montréal.

“I don't know how old I saw Monica Seles on central, but straight away I knew I wanted to be a part of it. But I didn't understand what it took. Now, at the Academy, I try to mentor young people who want to become pros. »

His professional debut was not smooth sailing. If she is now a trainer and speaker, used to speaking in front of a hundred people, the 34-year-old woman was very withdrawn at the time.

“One day, I was made to realize that if I wanted to do this, I had to get out of my comfort zone. So I started to come out of my bubble. I changed my personality. »

The changes paid off. At 21, Wozniak won a WTA title in Stanford, California. She was the first Quebecer to achieve such a feat.

The following year, she reached 21st in the world and the fourth round at Roland-Garros.

“I had to work hard to get there,” Wozniak said today. I was not the most talented, I had to train hard. But I had the passion.

Happy despite the regrets

She was the pioneer of Quebec tennis. But Aleksandra Wozniak can't help but wonder what heights she could have reached if, in her time, the coaching of Canadian players had been similar to that which they enjoy today.

There were also those serious injuries, to a shoulder and a knee, which kept her away from the field for many months and which forced her to rebuild her ranking twice.

In the last years of her career, Wozniak, accustomed to the splendor of the WTA circuit, found herself again at the bottom of the pyramid, on that of the ITF. Its sponsors then abandoned it.

“With everything I had done, I thought I deserved coaching until the end. And I was very close to my goal, which was to return to the top 100…” she regretted.

“I found it difficult that no one helped me . That's where I learned that even if you're generous, kind, you never know when you're going to be let down. It really hurt me, because I had never asked for anything before. So I isolated myself.

Then, four years ago, another injury spelled the end of his career. Wozniak recalls hearing his knee pop in practice.

To hope to return to the circuit, she would have had to take a break of several months, then start from scratch in the standings.

The Quebecer was then 31 years old. She was not ready for retirement, but she chose to hang up her racquet.

Now at the head of her tennis academy, married and mother of little James, 1 year old , she feels serene. And happy.

“Despite all the experiences, the injuries, the fact that Canadian tennis wasn't as recognized, I'm very grateful for what I've been through,” she said.

< p>“I am also grateful to those who helped me and I made peace with those who did not want to. Everything happens for a reason. »

A PIONEER IN QUEBEC