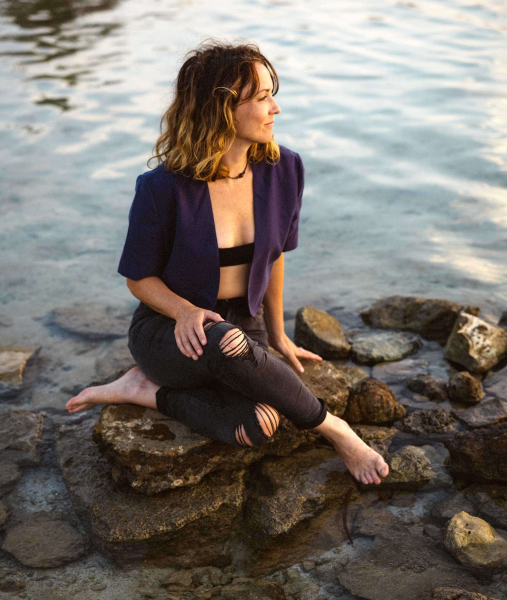 The singer-songwriter Alex Doré offers us a first mini-album combining rhythms, marriage of instruments and softness of voice and subject. Named Island, this first opus is inspired by the rich vocabulary and countless images related to the sea, sometimes gentle, sometimes turbulent.

Alex Doré has given birth twice in the past year. From a little Elliot first, then from the six songs forming this sweet first album.

It must be said that at 37, the new mother was ripe: ripe to dive into a musical project of her own and to lean towards a more sedentary lifestyle with her lover (Charles Robert, a multi-instrumentalist artist and the director of the album) and their brand new first son.

Islandprecisely returns to this life of a traveler that she leaves slightly behind. This island is that of Formentera, neighboring Ibiza, in Spain, where the singer and musician lived for ten years.

It is this island, with its places , its inhabitants, its encounters and its past experiences (the artist accompanied local music groups of all styles on the piano), which inspired this first – too short – album.

La nice piece The tide is risingaddresses the artist's concerns about the management of the climatic and environmental situation by individuals and by society, while the song My heart plays, precisely, with the rich lexicon linked to the sea.< /p>

“The song Là-bas was written when we got back from that trip, she says. I had all my memories on the ground, I didn't want to say goodbye to this life, I was torn between a more sedentary life versus my nomadic life. I wondered if I was going to have children… then it was the best decision of my life!”

The musician from Chicoutimi, who composes her songs on the guitar, has since returned to the island of her memories and her old life. In particular in 2021 to take the photos that accompany this album which comes to appease the mourning of this place and this bygone era.

“I am proud of this mixture of organic instruments and electronic sounds, confides the one who studied at the National School of Song in Granby. It's a nice result. The texts too, I think I have improved a lot in recent years. My technique is to refine and question myself on each word used.”

“I had this feeling that I was going to do this in life”, launches d' elsewhere the artist who is certainly not at his last musical project.

The album Island by Alex Doré is on the platforms. She will be part of the program of the La Noce festival in Saguenay this summer.