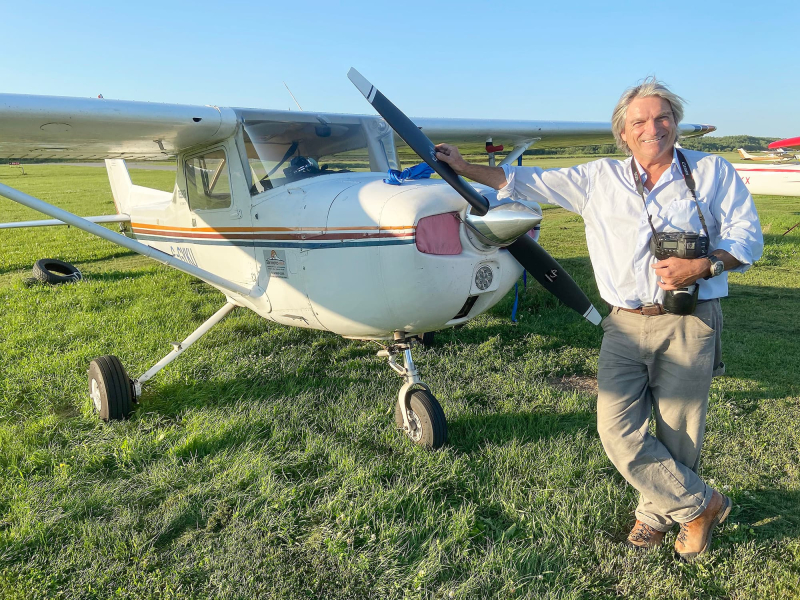 After flying over Quebec territory for decades aboard his own plane, taking tens of thousands of images and capturing the beauty of all regions of Quebec, pilot and aerial photographer Mario Faubert makes tribute to his native land in his new book, Quebec seen from above. From the Château Frontenac at dusk to the Pingualuit crater, via Gatineau, the Saguenay Fjord or the agricultural lands of the St. Lawrence Valley, he makes us discover Quebec from a unique, original and very amazing.

His new book brings together more than 150 images from all regions of Quebec, selected from tens of thousands of others that he keeps in his archives. His book covers the entire territory of Quebec and reveals images taken by plane (his own!) and by drone (he is also a certified drone pilot).

Coastal erosion seen from the sky in Grande-Rivière, in the Gaspé.

In an interview from Antigua, where he was sailing before the holidays, Mario Faubert describes the substantive work behind this unique book. What makes Quebec unique, in his opinion, seeing it from above?

“When you fly over the West Indies, things are very similar from one island to another: there is a volcano, palm trees, the seaside. There is everything. The territory of Quebec is very varied: there are mountains, from the tundra to Nunavik, the seaside, the river, the large agricultural lands of Monté-régie,” he comments.

“We have a superb city, Quebec, which is somewhat reminiscent of Europe. Greater Montreal. In addition, with the seasons, it changes all the time. It's never the same! We never realize it enough. »

The frost has formed a core of ice on Lac des Deux-Montagnes.

The logistics behind this book are impressive.

“I've been a pilot since I was 17. At the beginning, I did not dedicate myself to photography. For me, flying is easy. I just had to combine photography with flight. »

And how does it work, concretely?

“I'm still sitting in my plane, alone. My photographic equipment is with me. Next door, on the seat, I have all my lenses. The camera is hooked on me. Then the window is still open. You can't have the window closed when taking pictures. When I fly, winter, summer, the window is always open. »

It doesn’t have to be hot, hot…

“In winter, I am dressed as if I were on a snowmobile. It's cold in the cockpit. I have heating, but since the window is always open, it is cold. Fall too. »

Mario Faubert is also a certified drone pilot in Canada and indicates that 15% of the images in the book were taken by drone, including the cover page, where we recognize the Borgot lighthouse in the Magdalen Islands.

“We took all the photos of the Magdalen Islands with a drone,” he explains, adding that it was not possible to fly on a single engine until then, for a question of distance and air regulations.

“Luckily, I still have 10 years of drone experience, so it helped me to fly the drone in these conditions. It went well. We made amazing pictures. No one knows, but I'm hiding behind the lighthouse! he adds, explaining that the drone pilot should not be seen in the images.