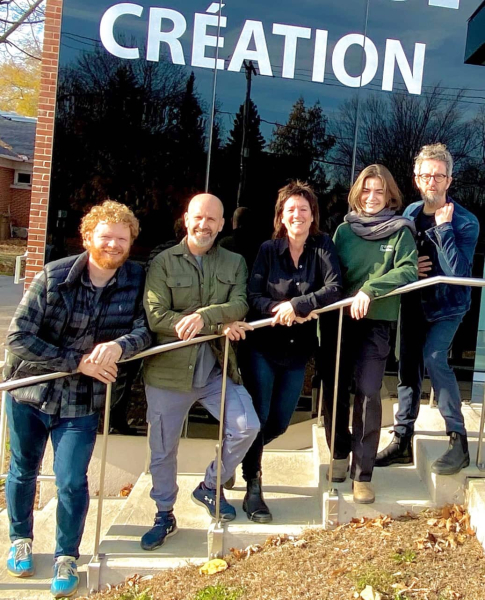 The Festive Vigils take the stage at the Petit Théâtre du Nord for a second consecutive year with a mix of tales , songs, memories and facts from the past of the Laurentians.

“The angle this year is the roads: the paths we take and those that lead us to change internally, explains the co-founder of the theater Luc Bourgeois, who plays in this production. It is an open theme that we proposed to the authors who wrote for this show, drawing inspiration from historical facts, real anecdotes and completely invented things. »

Among them, we find the prolific Rébecca Déraspe. Luc Bourgeois, Sébastien Gauthier, Marie Reid and Mélanie St-Laurent will bring the texts to life under the direction of Benoît Vermeulen. Benoît Archambault, from the group Mes Aïeux, provides the musical component by playing on stage.

The idea for this theme came while thinking on what the Lower Laurentians are.

“It's not a resort region, a destination,” explains Luc Bourgeois, who grew up in Blainville and lived for 22 years in Boisbriand before moving to Montreal in September. It's really a place of passage, a crossroads, with all these highways like the 15, the 640 and the 50. We brought out historical facts about the road network in our part of the country, such as the development of route 117 by example. This material was intended to feed the authors. »

In order to link the different issues, historical texts on the region have been written by Luc Bourgeois. “We want these evenings to be unifying, festive and positive,” he says. Without cynicism, it's a sweet date. It is beneficial in these troubling times. »

Winning over the public

The Petit Théâtre du Nord will celebrate its 25th anniversary next year . He is at the heart of the artistic direction of the Center de création de Boisbriand, which was inaugurated last year.

“This new place has given us a second wind,” explains Luc Bourgeois. We can thus do a second production per year in addition to our play each summer. The Center also hosts creations related to dance, song and humor. We want to become a hub in our region. »

This institution intends to take advantage of the population boom experienced by the Lower Laurentians over the past twenty years, among the strongest in Quebec. .

“Many people have left the city to settle in our region, mentions the comedian. They are looking for places for shows as they had access to in town. So we have a growing audience. It's encouraging.”

For its part, the Petit Théâtre du Nord is counting on collaborations and co-productions with larger Montreal establishments such as Duceppe, in order to put on plays that could play in the metropolis as well as in Boisbriand.