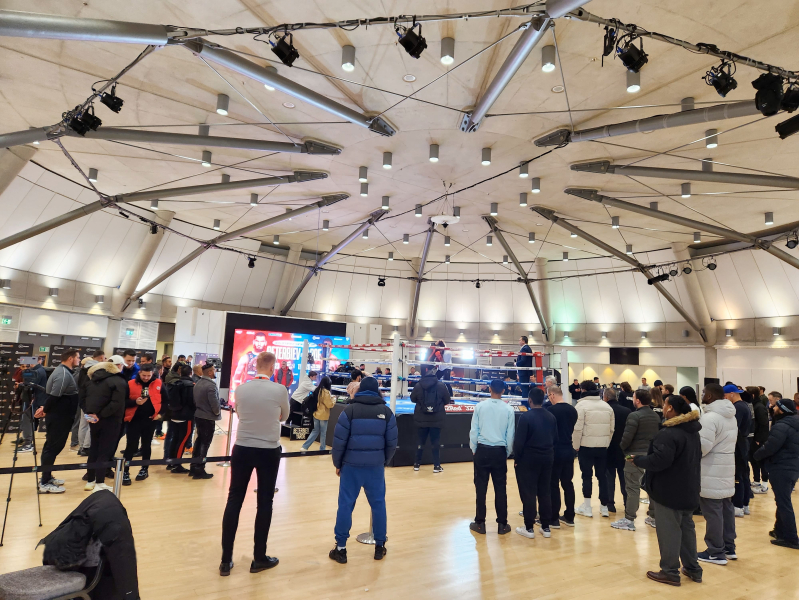 LONDON | These public workouts are show business. Images for television and blogs.

In Montreal, it often happens at Marc Ramsay's gym. Or in Quebec, in the great days of Adonis Stevenson or Lucian Bute, you could find yourself at Place Laurier.

At Wembley, it's bigger. It's more open to everyone. And above all, even if the Great Hall is ultramodern, it stinks of boxing. There are former promoters, former boxers, young amateurs, parents and friends.

And there is a swarm of journalists and television cameramen. It's over the top.

Marc Ramsay and Artur Beterbiev and the whole team are regulars at these shows for promotion.

It's rare that something happens in these demonstrations. But Marc Ramsay had a public training session in Sheffield that saw off his boxer Kevin Bizier's legs.

Kjell Brooks had given a terrific display in the ring and it was clear that Bizier had been impressed, intimidated and already knew he was going to the slaughterhouse on Saturday night.

It had lasted two rounds.

Yesterday, Ramsay, Beterbiev and the boys didn't even didn't glance at Anthony Yarde.

“If he's good, he might intimidate us. If it is bad, it could deceive us and give us overconfidence. I have nothing more to do at this stage,” said Marc Ramsay.

What I saw of Yarde? He seemed a little less bulky to me than in some of his fights. Very muscular, obviously very explosive and strong and very cut. Besides, everyone in the Great Hall was unanimous. Artur Beterbiev will need to come out of the first five or six rounds relatively unscathed if he is to protect his world titles and finish off Yarde before the deadline.

Yarde was in New York to witness the victory of Artur Beterbiev vs. Joe Smith Jr. I asked him if seeing Beterbiev up close could influence his strategy.

“No, because there are several Beterbiev fights that you had to watch to prepare.

– And did your loss against Sergei Kovalev teach you anything useful for Beterbiev? ?

“Not either. In any case, not specifically for Beterbiev. But I took advantage of the experience of this fight in Russia, at his home, and that allowed me to progress. »

Then he asked me a question:

“Are you from Canada? Don't think I'm going to fight stupid by forgetting the basics of boxing to knock out Beterbiev. I know how to box, I'm fast and I hit hard. It's gonna be a good fight.

I didn't contradict him.

THE LITTLE BALL IN BETERBIEV

Yarde smiled and gave a lot of interviews. It is fine as a silk. In any case, it was yesterday.

Then, Artur Beterbiev, who was waiting near the doors of an elevator, entered the Great Hall. With his face of a Chechen warrior, his frightening eyes and his beard of a terrorist.

He didn't smile despite somewhat silly questions from British TV. He posed seriously for the photographers and fulfilled his obligations as champion of three world associations.

He entered the ring with Luc-Vincent Ouellet. He did some skipping. Then he put his tennis ball around his head and hit the ball like Félix Auger-Aliassime.

He came down from the ring. Looking stupid.

Twice in a coma

LONDON | Nick Blackwell's story is poignant. More so, she is incredible for those who have followed the torments of Adonis Stevenson.

The handsome young gentleman was standing at the Grand Hall entrance with a little boy and chatting with a smile with a star of English boxing journalism. He heard my Falardeau accent and turned to me, holding out his hand: “Hello, I'm Nick Blackwell and my story is really special. I was plunged twice into a coma and yet, I am here today”. Like that. Point blank.

He told me. I checked everything afterwards. It was the truth. Blackwell died clinically in the ambulance after being knocked out in ten rounds by Chris Eubank jr. He fell into a coma for a week. Then, he miraculously woke up and no one quite understood how he regained his means. No sequelae. Nothing.

There was no longer any question of boxing but Blackwell, like many boxers, has boxing in his blood. He was not allowed to fight officially, but he offered to do twelve rounds of sparring against Hassm Kakkardi. What do you think happened?

He fell back into a coma. And this time, the aftermath was appalling. It was only after three years of incredible effort that he started walking and talking again.

That was four years ago. And yesterday, he was with his wife and son at the public training of Anthony Yarde and Artur Beterbiev.

You had to see him to understand that he still has boxing in his blood.&nbsp ;

THE FIBER OF ARTUR

Martin Brissette is the massage therapist in London. He has 25 years as a professional with athletes. He is fascinating to listen to when he talks about the muscle fiber of Bruny Surin at its best, that of Jean Pascal, of exceptional quality, or that of Artur Beterbiev, all in veins.

En Actually, Martin didn't use that expression, but that's the best way to sum up his thinking. Beterbiev, as my grandfather would have said to Falardeau, is a “well-nerved” man.

In fact, Brissette could almost tell, blindfolded, if he was massaging a black athlete or a white athlete, his hands were so sensitive.

In any case, the detectors of the airport do not miss them.

FOUND IN A Thrift store

That one, she's amazing. A lady who works in a thrift store received a batch of used clothes. And in the boxes were dozens and dozens of photos. Laurent Poulin of Boxingtown, a fervent historian of the little history of boxing, was able to get his hands on some of these photos.

The one that turned me on the most is the photo of promoter Raoul Godboult , with the hat on the right in the photo. Godboult was the figurehead and handyman for the real promoter, the legendary Eddy Quinn. But who the hell is the boxer between the two men? Laurent Dauthuille, Armand Savoie?

Jean-Paul Chartrand should be able to help us.

Luc-Vincent Ouellet, one hour before the arrival of Artur Beterbiev for public training, was already outposted at the Great Hall at The Drum in the very modern Brent Civic Centre. He was there to make sure no one could bother the world champion when he arrived.

It was our fourth day at Wembley and London. We hadn't seen any. Not one. I must have had some orange seed in my soles because last night they sprouted. They appeared yesterday morning and when it came time to go to public training, they were blocking traffic.

My heart ached and I thought of Montreal.