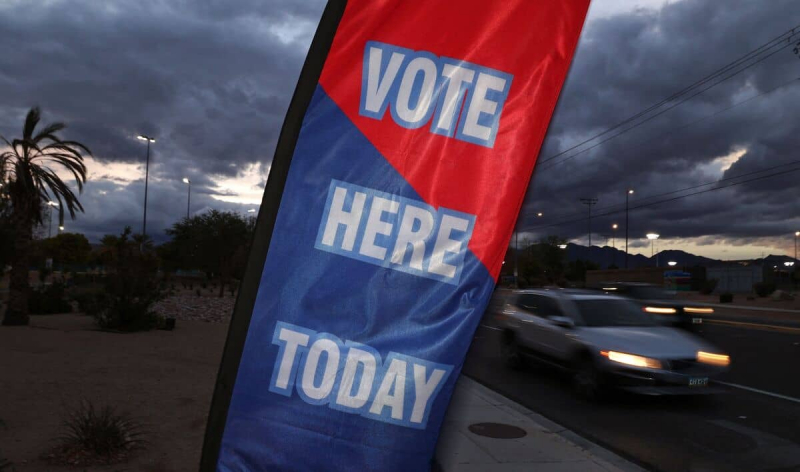 Americans vote Tuesday for crucial midterm elections for the continuation of the presidency of Joe Biden, but also for his arch rival Donald Trump, eager to relaunch in the race for the White House .

“Today make yourself heard. Vote”, tweeted in the early morning the Democratic president who could lose control of Congress during this vote traditionally unfavorable to the ruling party.

Go vote. You can make a difference in this election.

Confirm your polling location at https://t.co/Hy8C4n0lUk.

The first polling stations opened at 6 a.m. on the East Coast (11 a.m. GMT) but more than 40 million voters have already voted in advance to renew the entire House of Representatives, a third of the Senate and a whole series of local elected positions.

“There are a lot of important topics on the ballots,” said Alexandra Ashley, a 30-year-old lawyer met by AFP at a polling station in Pittsburgh, in the key state of Pennsylvania. “For me, the priority is abortion,” added this Democratic voter.

This debate has emerged in the campaign after the decision of the Supreme Court to return to each state the right to authorize or prohibit abortions on their soil. Five of them are holding referendums on the subject this Tuesday.

Inflation has crushed all other priorities in recent weeks, however, boosting optimism among Republicans who have relentlessly blamed the rise in prices to Joe Biden.

“If you want to end the destruction of our country and save the American dream, you must vote Republican tomorrow,” pleaded former President Donald Trump during a final meeting Monday night in Ohio, one of the country's industrial strongholds.

The 76-year-old billionaire, who is ostensibly flirting with the idea of ​​a new candidacy in 2024, announced that he would be making “a very big announcement on Tuesday November 15 at Mar- a-Lago”, his residence in Florida.

Omnipresent in this campaign, he seems to want to pull the rug out from under the feet of potential Republican rivals and make investigations into his role in the assault on the Capitol or his management of the White House archives more difficult.

< p>Organized two years after each presidential election, these mid-term elections are also a referendum on the tenant of the White House and the president's party very rarely escapes the sanction vote.

Until the end, Joe Biden's camp sought to avoid this scenario by portraying the Republican opposition, some of whose candidates still do not recognize the result of the 2020 election, as a threat to democracy.

“We viscerally know that our democracy is in danger,” pleaded the 79-year-old president during a last meeting Monday evening in Maryland, on the outskirts of Washington.

But the rise in prices – 8.2% on average over one year – remains by far the main concern of Americans and Joe Biden's efforts to pose as “president of the middle class” do not seem to have borne fruit. /p>

According to the most recent opinion polls, the Republican opposition has a good chance of winning at least 10 to 25 seats in the lower house – more than enough to win a majority there. Pollsters are more mixed on the fate of the Senate, with nevertheless an advantage for the Republicans.

Losing control of both houses of Congress would be fraught with consequences for the Democrat, who has so far said he “intends” to run again in 2024, foreshadowing a possible remake of the 2020 duel.

Monday evening, the president assured to be “optimistic” on the outcome of the ballot. He conceded, however, that keeping control of the House would be “difficult”.

If they regain a majority there, Republicans have already indicated they will launch investigations into the affairs of Joe's son Biden, Hunter, on some ministers and possibly impeachment proceedings against the president.

Concretely, the midterm elections are being played out in a handful of key states – the same ones that were already at stake in the 2020 presidential election.

All the spotlights are thus on Pennsylvania , a former steel-making stronghold, where Trump-backed Republican multi-millionaire surgeon Mehmet Oz takes on bald colossus and former small-town Democratic mayor John Fetterman for the Senate's most contested post.

Because on this seat very possibly depends the balance of powers of this upper house, with immense power.

As in 2020, Georgia is also at the heart of all desires. Democrat Raphael Warnock, the first black senator ever elected in this southern state with a heavy segregationist past, is trying to get re-elected against Herschel Walker, a former African-American sportsman, also supported by the former president.

< p>Arizona, Ohio, Nevada, Wisconsin and North Carolina are also the scene of intense struggles, where Democrats everywhere are opposed to the candidates of Donald Trump, who swear absolute loyalty to the former president .

These heart-pounding duels were all fueled by hundreds of millions of dollars, making this election the most expensive midterm elections in US history.

The first results could be announced from 7:00 p.m. (00:00 GMT) but the outcome of the tightest duels could be several days away.