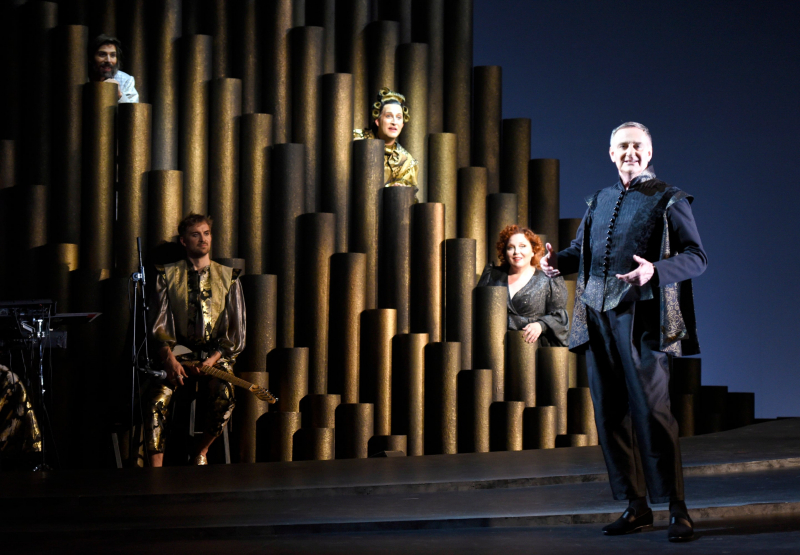 New and old, words and music, wit and absurdity, this new version of Twelfth Night by Shakespeare staged at the TNM is a happy mix of genres.

Director Frédéric Bélanger wanted to dust off this 17th century classic and he didn't not skimp on the means. Several songs are interpreted with three musicians who perform on the boards. These tunes are accompanied by kitsch costumes. And huge video projections enrich this proposal brilliantly translated and adapted by Rébecca Déraspe.

The creative duo thus removed characters and modified scenes, in addition to giving the floor to the jester (skillfully portrayed by Benoît McGinnis). Having become the narrator of this story, the latter recites the prologue and the epilogue which were created from scratch.

The basic plot of this work remains the same and it is not difficult to follow. It is about the fate of a man and a woman, identical twins, who end up separately shipwrecked on a fictional island. Alone, the sister disguises herself as a man to survive. Placing herself in the service of a duke who is madly in love with a countess, Viola falls in love with him, while the countess falls in love with her, believing that she is a man. These misunderstandings, which also involve intrigues with other characters, generate crazy situations that amuse the audience.

Yves Jacques is sublime in the role of the haughty steward Malvolio. He is well surrounded with the exquisite Marie-Pier Labrecque, who embodies the Countess Olivia, and the succulent duo played by Étienne Pilon and François-Simon Poirier. Unfortunately, the most bland character is the one at the heart of the story, that of Viola (Clara Prévost).

All these crossovers brilliantly highlight the amorous impulses that animate the protagonists and the melancholy that overwhelms them, since their gender and social conventions prevent them from living them. The crazy moments rub shoulders with the pearls written by the great British playwright. Due to its absolutely playful form, this piece is camped in entertainment. We do not necessarily come out of it with deep reflections. However, a powerful ode to love, and the freedom to share it with whoever you want, springs from this original and relevant show.

► On view at New World Theater until October 15