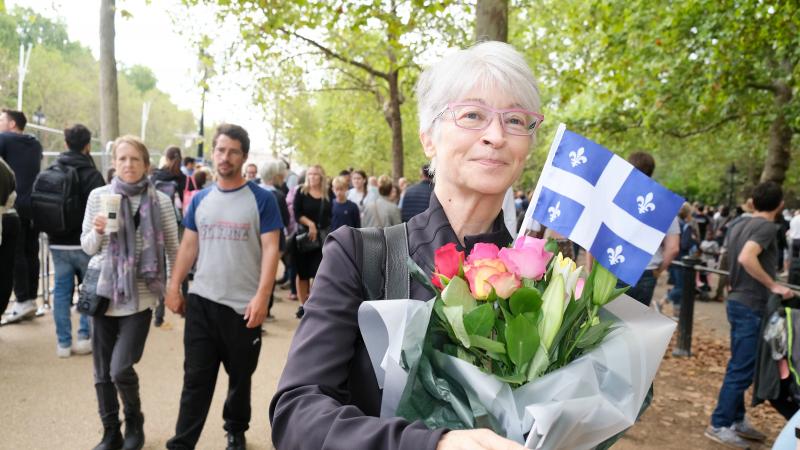 LONDON | Two Quebec expatriates who have lived in London for several years believe that attachment to the monarchy can be caught by living in the British capital.

“It became contagious. Not just to worry about it, but also to agree that it is part of the identity, ”says Kathleen De Santiago. The 34-year-old actress moved to London for love more than seven years ago.

Yet her mother raised her in Quebec without hiding her anti-monarchy feelings, she laughs. But even a sovereignist expatriate can be won over, as Suzanne Lussier testifies.

“I'm from the generation that voted for René Lévesque and 'yes' to the two referendums”, emphasizes the woman from Sorel.

Even if she recognizes that the monarchy “is not necessary” to governance of the country, she is struck by the “universal need that humans have always had to have a symbol”.

She went to carry a bouquet of flowers topped with a Quebec flag near the Palace of Buckingham.

According to Suzanne Lussier, the Queen represented the good of Britain, such as a sense of duty.

She has lived in London for over 25 years. First as a costume history student, then as a museum curator and fashion teacher, the 60-year-old fell in love and will never leave.

“But I still say to everyone that Canada is the best country in the world. It’s more progressive, here it’s not modern,” she says.

But she understands the great attachment of the British to the sovereign. “Children start school at age three here and the picture of the Queen is in the classroom”, illustrates Ms. Lussier.

< p>Kathleen De Santiago says the monarchy is 'leading by example' in Britain, unlike the revolving doors of controversial politicians.

Kathleen De Santiago says it's 'contagious' to love the Queen once United Kingdom.

“I have known four prime ministers in six years,” she recalls.

She also recalls the partygate scandalduring the pandemic, when ex-Prime Minister Boris Johnson held wild parties, while the British were forced to confine themselves. At the same time, the Queen was pictured at her husband's funeral, sitting alone in church to say goodbye to him.

Suzanne Lussier also believes that the stability of the monarchy, before the death of the queen, helped Britain through crises like Brexit or government turmoil.

And even with the hard times ahead of Britain, with inflation and a broken healthcare system, she believes the people will remain loyal to the Crown.

“The monarchy will never be accused of nothing,” she said.

A queen much more English than Canadian

LONDON | Britons bereaved by the death of the Queen would also be sad to see countries like Canada leave the British crown, even if they resign themselves to this possibility.

“Perhaps the time has come for countries to separate. Generations are different,” notes 74-year-old John Booth.

The Commonwealth is made up of 56 countries, most of which are former British colonies. Of these, the new King Charles III is the head of state of 14 countries, such as Canada, Australia and several islands in the West Indies.

Last year, Barbados declared its independence. Since the queen's death, the prime minister of Antigua and Barbuda has signaled his interest in holding a referendum on the future of the monarchy on the island. And in Quebec, the monarchy remains unpopular.

For the majority of Britons Le Journal met near Buckingham Palace, it was clearly the first time they had thought about the issue.

“I can understand that [the monarchy] may seem very distant to other countries”, adds Russ Parker .

“It seems inevitable to me [that countries choose to leave the monarchy], but it's hard to say how soon says Joe Little, publisher of Majesty Magazine, which has followed the activities of the royal family for more than 40 years.

Martin Higgins, who once served the Queen, loves corgis dogs just as much as she does.

According to him, the British are aware of the links that unite the Crown with foreign countries, but he does not know how much they really care about the Commonwealth.

Queen Elizabeth II is above all a very British icon.

“It's part of our identity, it's the first thing people think of when you say England”, says Sue Pulham.< /p>

But even a great Windsor buff like Martin Higgins agrees that “the monarchy doesn't really make sense”, although he loves the institution.