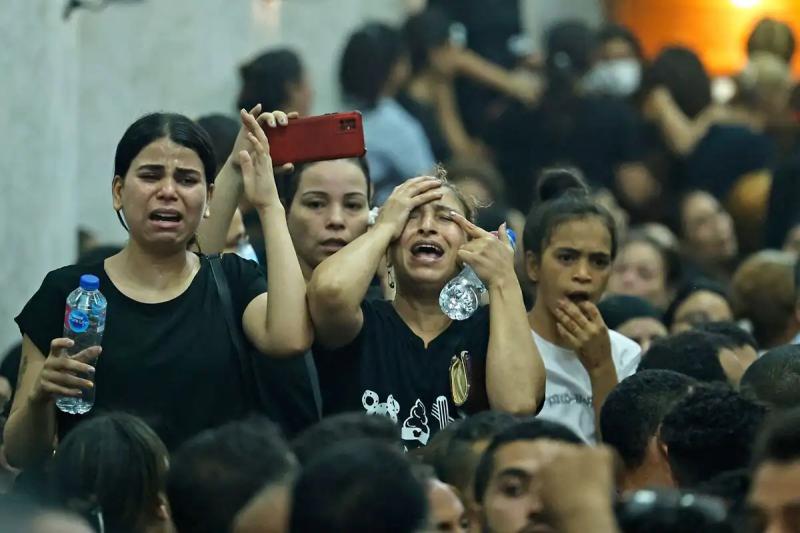 The day after the fire that claimed the lives of 41 people in a Coptic church in Cairo, witnesses to the tragedy on Monday point the finger at the Egyptian authorities, accused of having taken more than an hour to react, despite the official version.

This fire, caused by a short circuit, broke out in the middle of a mass at the Abou Sifine church, stuck in a narrow alley in Imbaba, a densely populated popular district on the left bank of the Nile.

According to the authorities and the Egyptian Coptic Church, 41 people died and 14 others were injured.

After several witnesses protested against the slowness of the emergency services, who arrived “one hour and a half” later, the anger spread to residents of the neighborhood and then to social networks, with Egyptians castigating the “negligence” of the authorities and demanding justice.

According to a press release from the Minister of Health, Khaled Abdel Ghaffar, “the paramedics were informed of the fire at 8:57 a.m.” and the first ambulance “arrived on the scene at exactly 8:59 a.m.”, which witnesses refute.

“No, the ambulance did not arrive in two minutes”, assures AFP Mina Masry. “If she had come in time, they could have saved people”.

And this in particular, because the victims died of asphyxiation and not burnt, indicates the Egyptian prosecutor's office, which notes “the absence of visible injuries”.

According to residents, people braved the flames and smoke to save the children themselves.

“Everyone was carrying the children out of the building,” said neighbor Ahmed Reda Baioumy. “But the fire was growing and it was not possible to return to it several times, at the risk of being asphyxiated. According to him, the firefighters were “hindered” by the narrowness of the street in which the church is located.

Witness to the tragedy, Sayed Toufik describes difficult scenes: “some threw themselves out of the windows to escape the fire, if you look at this car, you can see the traces of the impact left by a person who is now hospitalized, arm and back broken”.

In a video posted live on Facebook, Moha El Harra, who “lost his cousin's son” , also accuses the emergency services.

“I come from this neighborhood, I know that the ambulance could have been there in three minutes, it took them an hour and a half”, accuses the young man.

“We just want justice done. The local ambulance service, fire brigade, civil defence, all must be held accountable,” he adds.

The slowness of ambulance and fire services is not an isolated case, d 'as much as Egypt, endowed with dilapidated and poorly maintained infrastructure, regularly experiences deadly fires in its various provinces.

While the authorities have not confirmed how many children have died, journalists of AFP present at the funeral on Sunday saw several coffins for children. A local media published a list of the Imbaba hospital in Cairo with the identity of ten children under the age of 16 who died.

Already on Monday, a church had caught fire in Heliopolis, an affluent district east of Cairo, with no deaths or injuries.

The Copts are the largest Christian community in the Middle East and represent 10 to 15 of the 103 million Egyptians with a Muslim majority .