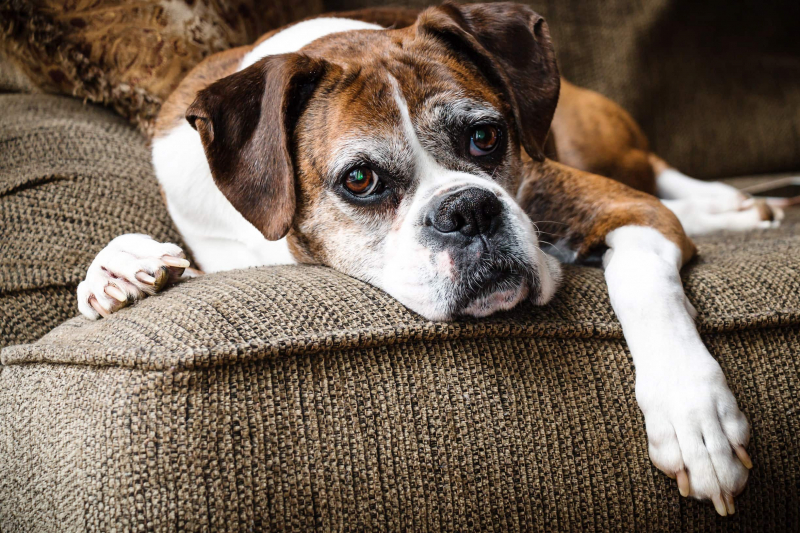 It's Animal Geriatrics Month and it's an opportunity to introduce you to Canine Cognitive Dysfunction Syndrome (CDS), a degenerative disease that occurs in older dogs that resembles strangely to Alzheimer's disease in humans and which could also simply be described as canine senility. This is a common disease in dogs over the age of 11.

Canine Cognitive Dysfunction Syndrome (CDS) is a progressive age-related neurodegenerative disease that results in deterioration of cognitive abilities in dogs. Cognitive functions include mental processes such as perception, awareness, learning and memory. In short, over time, the cognitive functions of the brain gradually degenerate and abnormal and senile behaviors appear.

About 30% of dogs over 11 to 12 years old are affected. The percentage increases even more above 12 years. Some 40% of dogs over the age of 14 have it. It often seems like it's less common than that, but, in reality, it's a condition that's often underdiagnosed. In fact, owners mistakenly believe that what they observe in their dogs is simply related to normal aging.

CDS is characterized by behavioral changes in the dog in which there is no underlying medical cause, hence the importance of consulting a veterinarian. He will have to make sure that no other disease can cause such behavioral changes before diagnosing CDS.

But what types of behavior are these exactly? What does a “senile” dog look like?

Veterinarians use a questionnaire (DICBAA) to assess a dog's cognitive functions. The name of the questionnaire is an acronym for Disorientation, Social Interactions, Sleep Cycle, Home Needs, Altered Activity, and Anxiety.

We can therefore observe that the dog with CDS will have behavioral changes in these six spheres: he may seem disoriented, look lost or no longer recognize certain people. He may act differently with people or animals and we will see a change in his social interactions. He may also experience changes in his sleep-wake cycle and may sleep less at night and pacing. He can also relieve himself in the house, something he did not do. Owners of the dog might also observe a change in his baseline activity level or see repetitive movements. The dog may also seem more anxious or more fearful than before.

It is an incurable condition, however, there are several things that can be done to slow its progression.&nbsp ;

And the sooner you get started, the better the results will be, hence the importance of consulting your veterinarian if you have the slightest doubt.

Examples of what can be done to slow SDC

< li>We must not forget the importance of cognitive (or behavioral) enrichment for the dog. It is about offering the animal a series of new games and exercises to promote learning, memory and other cognitive functions.