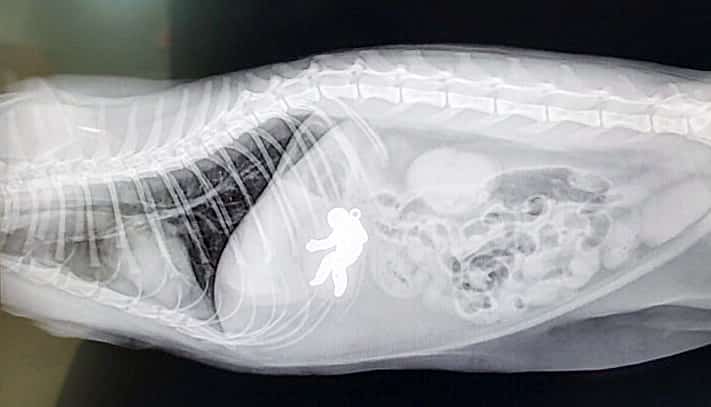 When I hear people say that animals know what's good for them, I always have a little reservation. As a veterinarian, I know very well that is not the case! Many animals find themselves in unfortunate and harmful situations for their health (some even risk their lives) after ingesting unusual objects called gastrointestinal foreign bodies.

Foreign bodies are one of the frequent reasons for veterinary consultations. In 2014, during a survey by the AMVQ (Association of Veterinary Physicians of Quebec in the Practice of Small Animals), nearly 60% of responding Quebec veterinarians said they had to go to surgery to remove a foreign body from the digestive system in the course of the same year.

Foreign bodies swallowed by our pets are of all kinds: rocks, non-food fibers, pieces of fabric or plastic, bone, glass, wood, metals, etc. I had also written a column on this subject and presented a list of the types of foreign bodies found (to see my column here).

Some foreign bodies are more surprising than others. So much so that there is an annual competition for veterinary X-rays in the United States, called “They ate what?” (What They Ate?), supported by Veterinary Practice News, where veterinarians submit x-rays of pets that have ingested particularly…strange foreign bodies. The results of the 2022 competition were released last October.

I present to you the winning x-ray and a noteworthy case that received an honorable mention, two easy-to-see items.

< p>X-ray 1. Winner of the competition and titled Stellar Revelation. This is a 2-year-old cat admitted to consultation at Braden River Animal Hospital (Florida), because he had ingested a child's collar. The surprise was at the end of the necklace in question and appeared with the x-ray: a small plastic figure representing a cosmonaut who was removed in surgery.

X-ray 2. Honorable mention titled Do you like to spoon? It's about Maggie, a young cross dog (German Shepherd and Labrador) who was rushed to the Alleghney Clinic Veterinary Services, West Virginia, because she had swallowed a spoon. Her master wanted to give her her heartworm medicine and hid it in a spoonful of peanut butter, but Maggie swallowed it all at once, spoon included! The spoon was removed in surgery.

Do you believe that American animals are the only ones who swallow strange objects? Next week, I'll show you very Quebec cases!