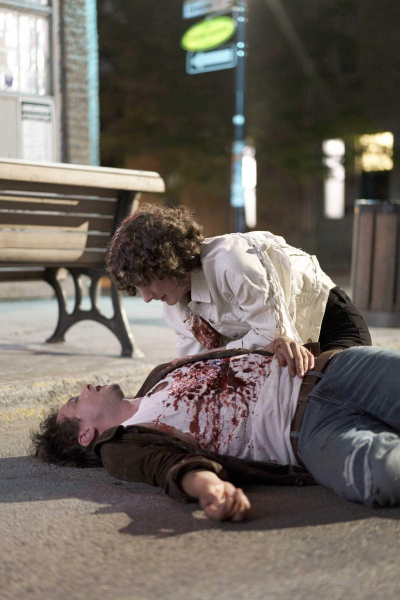 The Anne and Arnaud series delves into the heart of the tried bonds of a mother-son relationship and the difficulties inherent to the world surrounding homelessness. Not only does the eight-episode miniseries promise a plethora of emotions and prove to be touching, but it will undoubtedly ensure a change of perspective on a harsh, misunderstood and infinitely complex reality.

Free adaptation of Francine Ruel's novel, Anna and the child-old man, the series recounts his relationship with his son Étienne, who lived on the street for part of his adult life.

“Many of his anecdotes nourished me in writing”, explains the playwright.

We find this attention to detail mixed with a beautiful sensitivity in the first two episodes presented to the media on Wednesday.

“However, the goal was not to imitate Étienne, specifies Nico Racicot who portrays the character of Arnaud. Étienne has his life, Arnaud his. Yes, it is inspired by the life of Etienne, but it is not a verbatim, nor an imitation. »

Guylaine Tremblay is the mother of Arnaud in the series which reserves bright moments.

The series thus opens with two events that echo each other: the difficult childbirth of Anna (played by Guylaine Tremblay) in 1990, where she almost lost her baby, and scenes that seem to evoke an accident where she would have failed losing his son a second time. “Since then, fear has been with me,” says Anna's voiceover.

We then find Arnaud (played by Nico Racicot) in 2021, begging between the cars. As for Anna, whether it is the sight of a helium balloon or the passage of homeless people lying on park benches, her universe is inhabited by a dull concern: it is impossible to live a normal daily life without being continually brought back to the reality of his son who has become itinerant.

This is followed by a dive in 2010 where Arnaud is 20 years old, is in love with Charlotte (Ellicyane Paradis), inhabited by a travel project and eager to try the auditions at the Conservatory in music in guitar.

No downside: he is close to his “Mamita”, from a loving family, parents divorced, nothing more. At the dawn of the departure, Arnaud is shot from a car after an evening with his lover. We will find him on the operating table with a mother eaten away by anguish. He will not recover from this attack. This is where its descent into the streets begins.

The two main actors during the viewing of the series.

In her role, Guylaine Tremblay is overwhelming. Nico Racicot's game is also remarkable. The duo of actors offer a subtle performance: the son does not hesitate to manipulate his mother, who spends money to dress him without being fooled.

As for Louis Bélanger's production, it is carried with great sensitivity. “We had a lot of freedom from the broadcaster and the producers. I wanted to approach the project with modesty, because I want viewers to love the humanity of these characters, no matter if they make bad decisions. »

The concern for truth was also important for Bélanger. The reality of the street is depicted at times in a disarming way, attempting to demystify it in many ways. For example, we understand that drug addicts must take responsibility for protecting themselves against overdoses and obtain naloxone from their pharmacist. We guess that the trajectory will be thorny, but the two episodes suggest that there will also be light emanating from the series.

Anna and Arnaud will air Tuesdays at 8 p.m. on TVA, starting September 13.