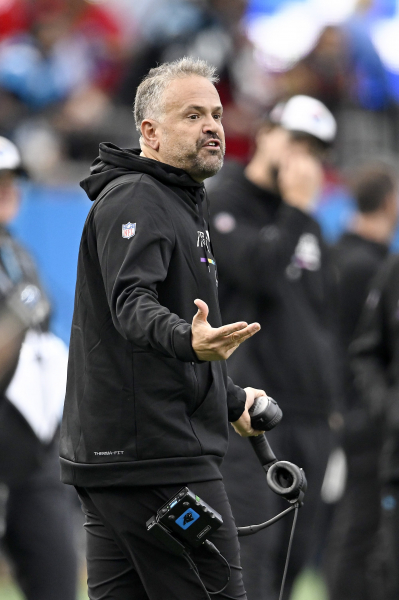 Matt Rhule on Monday joined a towering circle of head coaches who have failed miserably in the NFL after earning enviable reputations in college.

< p>His record of 11 wins and 27 losses was a great disappointment, having signed a lucrative seven-year deal for 62 million in 2020.

Rhule had nevertheless done a colossal job to quickly recover university programs where he directed, at Temple and then at Baylor. But now, he is far from the only one in the NCAA to have seduced the decision-makers of the NFL and then stumbled into the professional adventure.

Even one of the most respected coaches in history , Nick Saban, was unsuccessful (15-17) during his brief dip as head coach in the NFL.

Of course, others have made the transition very well, like Pete Carroll with the Seahawks and Jim Harbaugh with the 49ers. However, generally, the transition is disastrous.

A few factors explain this trend. In the NCAA, it is easier for pilots to impose their vision, sometimes set up as a dictatorship, on impressionable young players. It's a different world when it comes to dealing with men.

The nature of the job is totally different and just because all of these coaches have failed in the NFL doesn't mean they don't know how to lead.

For many, including Matt Rhule, the main shortcoming was to settle on the quarterback position. The latter played musical chairs between Teddy Bridgewater, Sam Darnold, Cam Newton and Baker Mayfield. This is what will have caused his loss in the NFL.

Because in the NCAA, other institutions where the position is open such as Nebraska, Wisconsin or Georgia Tech will roll out the red carpet for him.< /p>

Tomorrow night's duel between the Commanders and the Bears puts another struggling driver, Ron Rivera, in the spotlight.

In his third season, his team takes a nosedive and now he's gone straight for the finger his new quarterback, Carson Wentz. The latter is far from being the only problem, but it is clear that it is clearly not the solution either. No more than were Alex Smith, Taylor Heinicke, Kyle Allen and Dwayne Haskins.

Ah, that fatal position for coaches…

The Quebec cornerback is having a good second year, he whose rookie season was marred by concussions. He has taken part in 81.9% of the Commanders' defensive plays so far and leads his team with four knockdowns. St-Juste adapted well inside and on Sunday he was brought back outside as a replacement for William Jackson. The former Cégep du Vieux-Montréal alum is establishing himself as a solid starter.

The State of Forces in the NFL – Week 6

The Bills are rumored to be interested in Panthers carrier Christian McCaffrey. They could follow the example of the Rams, who never hesitated to acquire stars to guide them to the promised land last year. A file to follow.

The Eagles weren't dominant against the Cardinals, but they got away with a win on the road. The health of the offensive line is a concern, especially in view of a critical matchup against the Cowboys. The NFC East Division is suddenly full of power.

Throughout the offseason, we wondered what would happen with the Chiefs without Tyreek Hill. Yet Travis Kelce is still here to wreak havoc. He scored four touchdowns against the Raiders, even though everyone knew he would have the ball. What a weapon in the paid area!

The Cowboys' best hire is definitely Dan Quinn. When the defensive coordinator showed up last year, he had inherited the unit that had conceded the most points in Cowboys history. Since then, this defense has been one of the best on the circuit.

The Bucs won, c is what matters. Except that once again, we did not see the expected team. The defense gave up 151 yards rushing, after giving up 189 last week. On offense, Tom Brady and Leonard Fournette took matters into their own hands.

The Ravens regain control of the North Division. After heartbreaking losses to the Bills and Dolphins, they were finally able to end a close game in style. Lamar Jackson had it his way by running four times on the final offensive push.

The Vikings won their third straight game and in each of those wins, Kirk Cousins ​​responded with big plays late in the fourth quarter. Once again, the team complicated their life by letting the Bears get back in the game. Nothing is ever simple.

The victory cost the Niners dearly. Cornerback Emmanuel Moseley has suffered a knee injury and his season is over. Marauder Jimmie Ward has a broken hand. Defensive end Nick Bosa suffered a groin injury. Even kicker Robbie Gould injured his knee.

Prior to the win over the Packers, Saquon Barkley had 43% of offensive gains. This time he contributed 31%. It's been quite a start to the season for the rusher, who has amassed at least 100 yards from the line of scrimmage in his last three games, his longest streak since 2019.

Before the season, several to Green Bay claimed this defense would be the Packers' best in a very long time. It's time for her to show up. For his part, Aaron Rodgers was 0 for 5 on his long pass attempts of at least 20 yards.

The Chargers were 25th before the game against the Browns in terms of running. They exploded for 238 rushing yards. Nothing better to take some pressure off Justin Herbert and less expose his injury. A recipe to repeat.

The Dolphins were the first victims of the concussion protocol tightening, when Teddy Bridgewater passed the test and couldn't return to the game even without a concussion because a doctor thought he was staggering. Gossips will talk about karma…

The Titans are coming off a third straight win and heading off to the bye week with peace of mind. If there is an adjustment to be made, it is to limit the big games. The Titans have allowed six plays for 40 yards or more since the start of the season.

For once the offense on the ground worked, the air attack had to be limited to short gains. Ja'Marr Chase hasn't gained 100 yards since week one. The connection with Joe Burrow operates less than last year on explosive games.

In five years under Sean McVay prior to this season, the Rams were held to 10 points or less only eight times. This season, it has already happened three times. The ground game is moribund and Matthew Stafford is slaughtered behind a porous line.

Rookie quarterback Bailey Zappe won his first game completing 17 of 21 passes, including a touchdown. The defense shut out the Lions, who were showing the best offense in the circuit so far. Bill Belichick froze Jared Goff, like in the 2018 Super Bowl.

The Saints rediscovered Taysom Hill by using it all the way while big pieces were still missing from the attack. He became the first player in the franchise since Archie Manning in 1977 to score three rushing touchdowns in addition to throwing a touchdown pass.

Good news for the Cardinals despite an eighth straight loss at home, is that the West Division is still open. With two wins and three losses, they are no worse than the Rams and Seahawks, while the 49ers lead at 3-2. All is not lost.

The Colts are probably the weakest team playing for .500 in history, in any sport, in any galaxy. The offense continues to tear dangerously, but at least rookie receiver Alec Pierce is establishing himself.

After being treated to two excellent games from Trevor Lawrence, the Jaguars had the version of Lawrence who has been inconsistent for two weeks with seven turnovers. He looked like a quarterback playing his first game, facing Texans veteran Lovie Smith.

The Raiders squandered a 17-point lead, they were penalized 11 times and Josh McDaniels' decision to go for a two-point convert is hard to explain. Leaving the field, Davante Adams did much worse by pushing a man in his way to the ground. Suspension in sight?

The Browns gained 213 yards in ground against the Chargers, but still found a way to lose. It's almost criminal. Nick Chubb continues to terrorize his rivals, he who added 134 yards to his collection. Imagine if he didn't share the backfield with Kareem Hunt…

Offensive n He only scored 15 points against the Buccaneers and it should come as no surprise, knowing that runner Cordarrelle Patterson and tight end Kyle Pitts were on the sidelines. All Falcons games this season have been decided by six runs or less.

Seahawks carrier Rashaad Penny, who was barely taking off, suffered a broken tibia. It's time for rookie runner Kenneth Walker III to take pole. On the defensive side, it's a disaster. Will Pete Carroll find the miracle cure?

Another disastrous performance for the Broncos. This franchise started the season with a new owner. He had no say in the hiring of pilot Nathaniel Hackett, who is in serious trouble. At this rate, he won't survive the season.

The Steelers hadn't suffered a 35-point loss in the Mike Tomlin era or the Bill Cowher era. The 38-3 thaw against the Bills is their worst since a 51-0 loss to the Browns in 1989, when the legendary Chuck Knoll led the team. The Steelers are unrecognizable.

There is hope in Chicago, despite losing to the Vikings. Justin Fields was smoking in the second half (12 for 13, 135 yards and a touchdown pass), in addition to having his long run for a touchdown canceled by an illegal block. It is too early to announce its fall. Way too soon.

Finally a first victory for the Texans! The defense got their act together by being the first unit to limit the Jaguars to less than 21 points. Dameon Pierce still amazed with a few violent races at will. Now we have to beat someone other than the Jags.

According to ESPN Stats & Info, the Lions are the first team in history to be shut out in week five after averaging 35 points in the first four weeks. The offense missed six fourth down conversion attempts.

Baker Mayfield continues to bogged down and he walked in a protective boot after the game. The offense completes just 24.1% of its third downs, the worst rate in the league. Not a team has completed less than 25% of their third downs since the 2005 49ers.