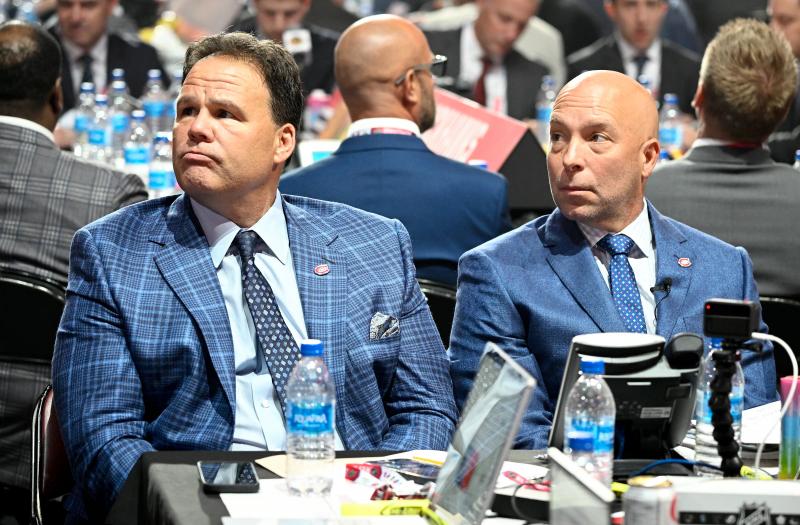 Should we expect the Canadiens' decision-makers to be very active in the unrestricted free agent market?

On the face of it, unless major changes occur in the next few hours, the Jeff Gorton/Kent Hughes duo have very little room to manoeuvre. Certainly, there is the prospect of placing the name of Carey Price on the list of absentees for a long period, but still it will be necessary to wait until the start of training camp or the start of the season.

There again, we live in the unknown, unless the leaders of the Habs have relevant information about the goalkeeper.

Meanwhile, while the organization's young player evaluation camp is taking place in Brossard, in the administrative offices, several options are being studied to give even more luster to a team that finished last in the general standings.

We have already changed the personality of the organization. The repechage – during which, unfortunately, the Quebec Major Junior Hockey League was again neglected – clearly shows that we want a versatile formation, which, eventually, will be able to adapt to all styles by promoting speed, passion and character. We want to give a new culture and, for this reason, we will ensure that the workforce meets expectations.

The players selected a few days ago are short and medium term projects. As the repechage is not an exact science, we are not immune to surprises.

The fact remains that the Canadian now has depth. The organization is well off in the minor leagues. Starting in September, it will be the entry into the NHL world of a few defenders. Also, striker Juraj Slafkovsky will be there, unless there is an unexpected turnaround.

Now, can we believe that new experienced players will be added to the group?

There are many options.

But above all, significant changes must be made. Hughes and Gorton will not solve problems by clicking their fingers. The competition is fierce, parity invites general managers to exercise great caution.

The duo will therefore have to Gorton/Hughes finds a way to release contracts that distort the deal and risk slowing down the process of reviving the concession.

We make some projections, we extrapolate on the composition of the trios. Brendan Gallagher may very well end up in the third unit with a salary of $6.5 million. We will admit that the equation does not work.

Mike Hoffman at $4.5 M per season, that doesn't fit at all with what we're looking for now at the Canadiens.

Except that the salary cap is also a source of concern for the Canadiens. other NHL team decision makers and that makes Hughes' job even more difficult. We won't give him a welcome gift.

This noon, when the free agent market opens, what budget will he show up with?

He revealed to his counterparts a list of players who may be of interest to them. Good veterans, athletes who in a top team could make the difference. Gallagher and Price, because of their contract, represent enormous risks, and in the current environment, who would dare spend a fortune on one or more hockey players with rather limited resources.

On the other hand, Hughes probably had to answer several questions about Josh Anderson, Jeff Petry and Christian Dvorak.

A lot of contracts

Over the next few hours, the Canadiens' decision makers will try to get rid of a few contracts in order to attack the free agent market with some purchasing power.

Who are players who could interest the Habs?

On offense, it's hard to predict, especially when you don't know the budget that Gorton and Hughes will have.

Let's not forget that the two decision-makers captured attention during the draft. Can they pull off another smash hit?

Here are some of the decisions GMs have made over the of the last days.

› Matt Murray in Toronto. Why ? Is he a better keeper than Jack Campbellwho requires $5M per season? Kyle Dubas believes him, except that he has not solved his problem with Murray.

› An eight-year contract and $6,125 million annually for Valeri Nichushkin. That's a lot of money for a skater who, until last season, was a big disappointment. An enigmatic player.

› Vítek Vanecek is traded. Ilya Samsonov doesn't have a contract and the Washington Capitals said to him: “thank you for the services rendered”. Who will be the Caps' number one goaltender? Darcy Kuemper?

› Will the Edmonton Oilers identify Jack Campbell as their priority? They should.

› Go will he stay in Calgary or will he try his luck on the free agent market? The spotlight is on Johnny Gaudreau.