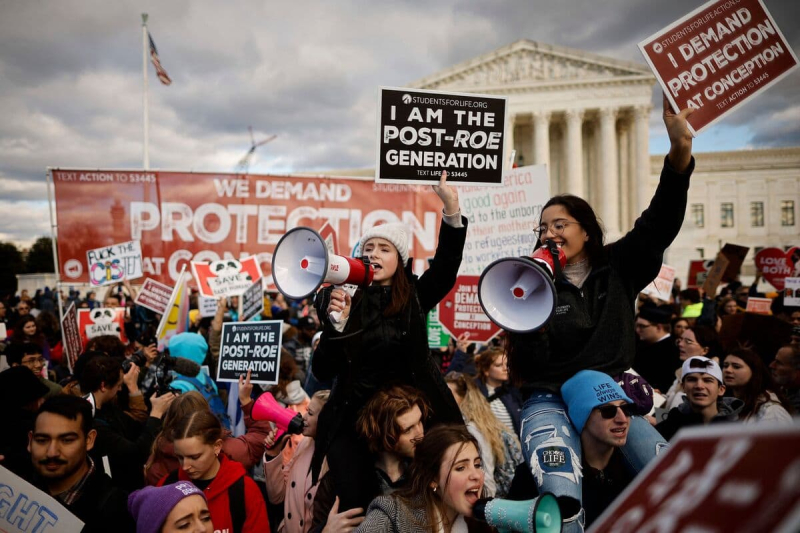 The mood was more combative than festive among the thousands of abortion opponents who gathered in Washington on Friday for their annual march, the first since the historic U.S. Supreme Court U-turn.

Even if the high court blasted the right to abortion in June, “we still have so much work to do”, noted George Muench, a 74-year-old Catholic with a screwed “March for Life” cap on the head.

Like him, most of the demonstrators encountered by AFP barely took the time to savor their victory, their minds already fully focused on the battles to come.

This march had however started in 1974 especially for challenge Roe v. Wade, adopted a year earlier by the Supreme Court and guaranteeing the right of American women to terminate their pregnancies.

Once a year, in January, opponents of abortion from all over the United States walked like this to the white marble building that houses the Temple of Law to ask him to go back.

On June 24, the Court, deeply overhauled by former Republican President Donald Trump, agreed with them, giving each state the freedom to ban abortions on their soil, which about fifteen hastened to do. /p>

The atmosphere is therefore “a little more festive” this year, notes Barbara Countryman, 61, who has not missed a walk for twenty years.

The crowd is also “significantly younger”, says this resident of the neighboring state of Maryland, surrounded by many groups of students from Christian schools who came by bus, some of whom display signs “I am the post-Roe generation” .

But for this anti-abortion activist, who regularly prays in front of clinics in her state, we must not stop there: “I think I will come until I die, we must continue to convert the spirits…”

“The question of abortion is now in the hands of the states,” notes Richard Guill, 50. He lives in Virginia, not far from there, where the Republican governor is seeking to restrict the right to abortion, without success so far with local elected officials. “We hope they will hear us today…”

“Many states still offer abortions on demand,” also regrets Kathleen Pilié, 78. Even if Roe has fallen, “we have to stay strong, we can't give in to complacency,” says this New Orleans resident.

She is still delighted that Louisiana immediately banned all pregnancy terminations. “I hope that the other States will follow, but for that, it will be necessary to change hearts and minds.”

Because everyone is well aware that the battle of public opinion remains to be won. Referendums since June have all been won by abortion rights advocates, including in conservative states like Kansas and Kentucky.

“The Democrats made it a political issue, invested a lot of money in campaigns, talked about the dangers when there is no right to an abortion (…) but they did not tell the truth” , assures George Muench.

Rosario Cazares, a 27-year-old Texan who came on a plane with her mother Virginia, recognizes that there are difficult subjects, such as pregnancies after rape, incest or among poor women. For her, it is therefore necessary to go beyond the speeches.

“We must also make sure to really help women” by providing them with various resources free of charge, assures this public health student who hopes to open a her own “centre for pregnant women”.

In the meantime, the appointment has been made for next year. From the podium, a speaker assures him: “We will go on year after year…”

But as of Sunday, for what would have been the 50th anniversary of the Roe v. Wade, it is the defenders of the right to abortion who will take to the streets, during rallies planned in several cities.