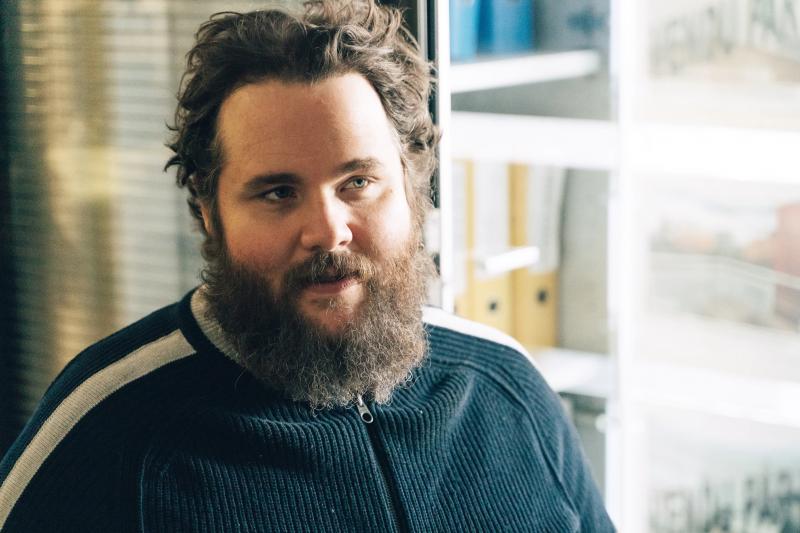 In I love what you do, French comedy by Philippe Guillard with Gérard Lanvin and comedian Artus , Antoine Bertrand embodies a local filmmaker with methods… to say the least special.

“I am aware that my function, in Philippe's film, is to be the comic relief. It is another irritant that is added to the life of Gérard Lanvin, who is caught with this ball, played by Artus. Explanations: Gérard Lanvin plays Gérard Lanvin. He is about to play the role of a French resistance fighter during the Second World War in an American blockbuster.

Arriving at the filming location, the producer introduces him to the new director played by Antoine Bertand and, at the same time, he meets Momo, played by Artus, a big fan who turns out to be annoying. The relationship between the actor and the director is far from simple. “Gérard does not understand what he is saying to him and my way of directing him is a bit playful… between playfulness and incompetence”, explained the actor, during an interview with the QMI Agency.

Antoine Bertrand had the freedom to add and modify some of his lines, and he did not hesitate, even though he indicated, in particular, to Gérard Lanvin that he did not quite understand his accent. “I like to serve them their medicine again, he said, referring to the fact that the French sometimes have trouble with our accent. But we hear it less and less. Yes, I make an effort when I'm there. At some point, you don't want to repeat everything 20 times, but they're a lot more open and try a lot more.”

“When I'm there, I don't does not misrepresent me, he noted. And I find it important, not only not to misrepresent myself, but to bring them a local flavor, and that's what they like.”

A fan of scripts< /strong>

I love what you do gave Antoine Bertrand the opportunity to spend a month in the south of France, living with Philippe Guillard, Gérard Lanvin and Artus. “I take it as asides, opportunities to meet new people and get a change of scenery… knowing very well that my career is where it's happening.”

This who interests him in a role, it's “all the time the scenario”, answered without hesitation the one who we also currently see in the Arlette by Mariloup Wolfe. “That's always the story. If I embark on the story, it doesn't matter my score in there. When I board, I board. I like doing a small role in a good screenplay as much as a big role in a dope.”

“A good comedy is hard to write. Something that is good throughout, which tells what, which is in the truth, which is not too much in the caricature, etc. All of this is really not easy to do. I would be lying if I said that playing with Gérard wasn't part of that trip.”

Obviously, seeing Antoine Bertrand play a director in such a funny way, you can't help to ask him if he intends to go behind the camera one day.

“I always like it. Sometimes I coach friends for auditions, and I love it. What I love about directing is finding ways to bring someone to a vision for a role, without playing it for them. It forces you to “psychologize” an approach. Yes, I'm tempted all the time, but the older I get, the more I realize I'm an actor. I'm not a comedian, I'm not an improviser, I'm not a singer, I'm not a director, I'm an actor. This is what I've always wanted to do since I was 4 years old, this is what I do, I don't lack work, do at some point, I say stay in there.”

I love what you do hit theaters on Friday.