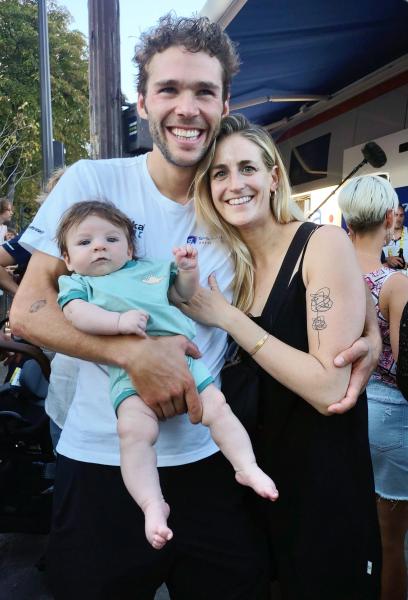 PARIS – CHAMPS-ÉLYSÉE | After completing a Grand Tour de France a little in the shadows, Antoine Duchesne had fun riding a breakaway in front of an incredible crowd on the Champs-Élysées on Sunday.

At the peak and in spades, the Quebecer puffed the wind daily for his captain David Gaudu. Every day, we saw him on the screen, well settled in front of him doing a job that was sometimes thankless, but very necessary.

Thinking of retirement not so long ago, Duchesne completed the Tour de France for the second time in his career six years after his first appearance on the Grande Boucle.

Even though his attempt failed on Sunday, Duchesne relished pushing hard at the front of the race. Their group has long maintained a slim lead of fifteen seconds.

“We thought we had worked all month. The breakaway was the hardest to take, but it was incredible. It was a cr… de Tour! mentioned the caribou, still expressive and happy with his performance.

The end of a grand tour is also synonymous with reunion and Duchesne was able to see his son, Jules, only three months old. Last month in Denmark, he was worried his boy wouldn't recognize him after the ordeal.

“He has changed so much in a month. He smiles. It's a big change in a life and it's weird to experience it separately, but it's worth it, ”said his spouse, Chloé Rochette.

Like many new fathers, Duchesne still had fears on Sunday when he was reunited with his son at the start of the stage. ” It was crazy. We talked all day. She was looking for a taxi. The metro was closed. I got out of the bus and went to pick him up. It was beautiful. »

At the conclusion of his 2nd Tour de France, the Quebecer also found his mother, his two sisters and his father.

« It is the best Trick he could do. We've never seen him end up like that in the passes. He accompanied David Gaudu as much as he could at 150%. He was in exceptional shape. He finished it in style in front of the crowd here, ”finished the father Marc Duchesne.