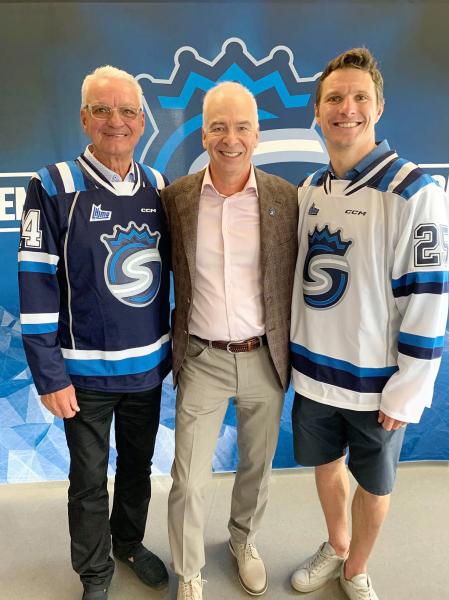 Antoine Roussel wore the Chicoutimi Saguenéens uniform in his four seasons in the QMJHL. More than 12 years after his stint, the fiery winger has chosen a return to his roots with the Sags.

Roussel and the former glory of the Canadian Mario Tremblay have accepted positions on the board directors of the Saguenéens.

Still looking for a contract with an NHL team, Roussel explained this association with his alma mater as a decision of the heart during a telephone interview with The Journal.

“That's what I said at the press conference. My Canadian life is tied to the Saguenay, said the player from Roubaix, France proudly. This is where I feel most at home. This is where I grew up as a young adult. This is where I learned my skills in the QMJHL [Quebec Major Junior Hockey League]. I was lucky not to be tossed about left and right during my junior career. »

“I have forged strong ties with this region of Quebec. My in-laws come from here, several friends from CEGEP and former Sags teammates still live there. I am really established in Saguenay. For me, it was important to represent a team that represents me well. I did not imagine myself with any other team than the Sags, ”continued Roussel.

“When they approached me, I was a little surprised. I am a young entrepreneur with my cabin [Érablière Au Sucre d’Or]. I'm still cutting my teeth in this area. The Sags gave me a helping hand and that makes me very happy. Today I sat next to the Bionic Blueberry and it was quite an honor. I'm lucky. I had to take this opportunity. »

In the footsteps of Marc Denis

The Saguenéens have opted for one player still active and another retired to absorb part of the void created by the departure of Marc Denis, who left in November 2021 his position as vice-president and member of the executive at the Saguenéens to lead a committee of experts charged with looking into the development of hockey in Quebec.

“I'll follow in Marc's footsteps a bit,” Roussel said. I don't think the verb “replace” is the right one. But I would like to fill the void created by his departure. Marc has succeeded wherever he has gone. He is an inspiration for me and the young people of Quebec. I will have a big mission to fill his shoes. I will experience managing a team from the inside. I stay humble, I don't have a bachelor's degree in business, but I want to learn.

Roussel does not have his eyes on a more important position with the Saguenéens. When asked if he would like to become the team's general manager one day, he answers with his usual frankness.

“DG, I don't know. The Sags have a solid team. Yanick Jean has been here for a long time [November 2014] and he is doing a very good job. If I can help him with hockey questions, I will be happy to do so. I want to help the organization regain a championship. I did not succeed as a player, but I would like to succeed as an adviser. »

The Coyotes are still an option

With less than a month to go until camps open in the NHL, Antoine Roussel is still looking for his next destination. A return to the Arizona desert is not impossible for the 32-year-old winger.

“I think the door remains open with the Coyotes,” Roussel said. There are several teams that are patient. They want to cut payroll. There is a team that blocks everyone a little and it probably starts with the Coyotes. It cuts off the progress of other teams. As long as it doesn't tumble, nothing happens. Despite this, I am not discouraged. »

André Tourigny, who will be in his second season behind the bench of the Coyotes, did not hide his desire to reconnect with number 26.

“'Rouss' [Roussel] is a very good leader, recalled Tourigny in an interview with Journal. Antoine knows where I stand. He was very good for our young people. He was exemplary in his effort. But the decision to bring him back or not is up to Bill [Armstrong] and the management. We also have several young people in Arizona. However, I can say that the door is not closed on our side, especially on the side of the coaches. »

“Bill loves him too,” Tourigny continued. Antoine is a real warrior. ‘‘Rouss’’ is a quality leader. And that's important for a young team. »

At 32 years old and with just over 600 games in the NHL, Roussel would like to continue the adventure for at least one another year. After contracts of four years and eight million and four years and twelve million, the left winger will not have money as a priority.

“I still want to play, I have still fun and I feel like my body can always keep up,” replied the former Stars and Canucks. Now represented by agent Allan Walsh, Roussel admits it's pretty quiet when it comes to negotiations with NHL teams. nothing concrete yet. It's not falling apart yet. I find it a little longer than I thought. I remain patient. I'm waiting for my turn and I hope it will come soon. Ideally, I would like to find myself a place before the start of the camps. »