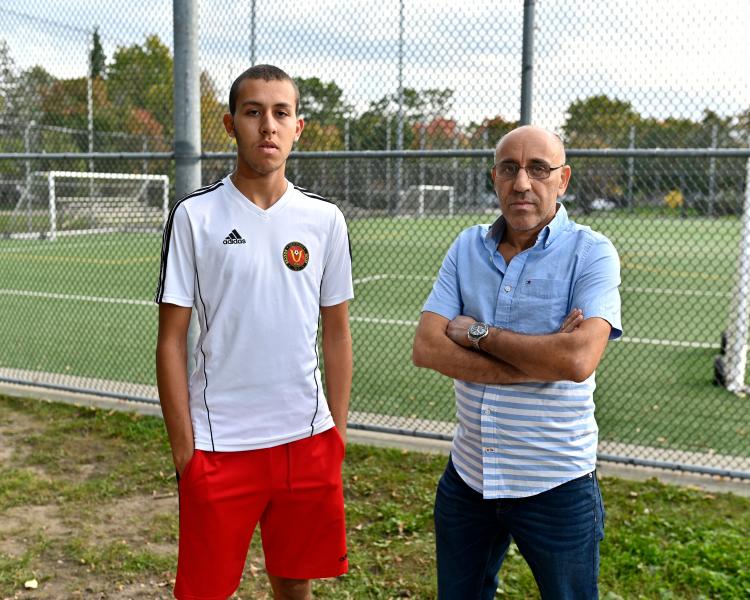 A father asks the mayor of Anjou for an apology after the latter insulted his 15-year-old son, who came to plead with the municipal council about his distress over the closing of the soccer fields.

The sequence, which occurred Tuesday during the municipal council of Anjou, quickly aroused indignation on social networks. We see Luis Miranda, the mayor of the borough, vehemently taking up Hocine Ouendi, 15, who came to ask him to reopen the synthetic soccer fields closed by the town hall at the end of August.

“Sorry, but you are 15 years old, I will not exchange with you, replies Luis Miranda. At 15, I would never have come to face the mayor. It should have been your father or your mother who comes before me, I have no business to speak with you. »

Smail Ouendi, Hocine's father, says he is “shocked” by Luis Miranda's virulence towards his son.

“He has to apologize, says this civil engineering technician . It is not normal for a mayor to speak in this way to a young person who has come to discuss with him in a very calm way. Instead of praising him for having the audacity to speak in public, he yelled at him, and also yelled at my wife who was with him. »

A few days after the municipal council, Hocine Ouendi admitted still not understanding the reaction of the mayor of Anjou.

“He acted aggressively, as if it annoyed him that I asked him a question, deplores the teenager. I appeared before him to explain my demands to him and he lost his temper for no reason. »

Contacted by Le Journal, Luis Miranda made a point of apologizing to Hocine Ouendi.

“I was tired, I shouldn't have talked to him like that, he acknowledges. But I have already spoken with these young people about the closure of the grounds and they do not want to let go. My decision is made and will not change. »

The closure without notice of two synthetic soccer fields in Anjou on August 26, on the grounds of supposed incivility, indeed aroused the ire of several Angevin citizens.

“Overnight they closed these lands which were frequented by a lot of people, deplores Smail Ouendi. Young people are asked not to hang out in the streets, but they are unilaterally deprived of sports facilities and outdoor activities. »

“We have received too many complaints,” says the mayor of Anjou. Young people returned on scooters to the grounds or left their rubbish lying around. Park wardens were intimidated. I have to maintain security, so I have decided to close the grounds until further notice.

A decision considered radical by many regulars like Hocine Ouendi, who came to play soccer for almost 2 hours every day.

“I have been used to playing here for several years, explains the young resident of Anjou. I have sometimes noticed incivilities, but it is very rare. The majority of people come to practice for fun and in a good mood. Instead of solving the problems created by a minority, we punish the vast majority of benevolent players. »

Other remarks made by the mayor of Anjou during the municipal council on Tuesday are also judged as discriminatory by several citizens .

“Do you all look in the mirror and then ask yourself the question, why am I having problems only with soccer and not with other sports?”, had then launched Luis Miranda to Karima Bedjou, Hocine Ouendi's mother. “Educate your children. There are many who are uneducated.

“We know very well that the soccer fields are frequented by many young people of immigrant origin, underlines a parent who requested anonymity. With these remarks, he associates the lack of good manners with certain immigrant communities. Even if he says it in a subliminal message, it's discrimination. »