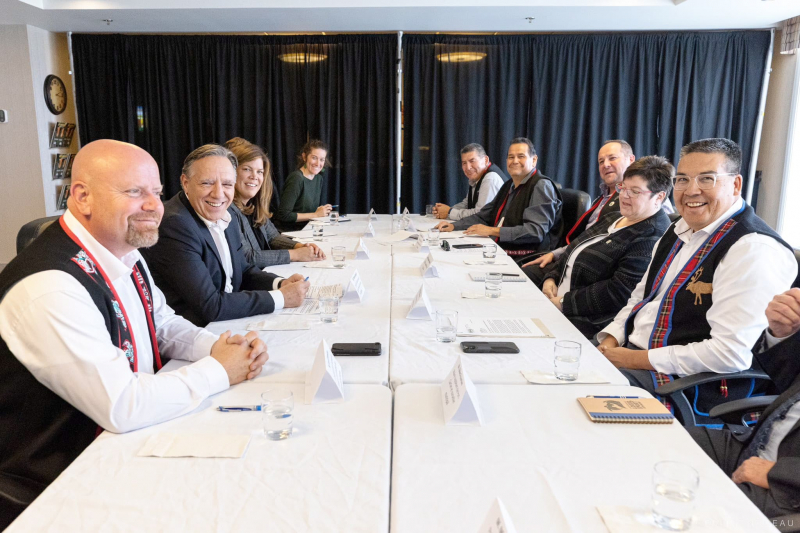 A week before being re-elected, Prime Minister François Legault met with managers of the Apuiat wind farm with his candidate Kateri Champagne Jourdain, then an employee and lobbyist for the project promoter.

All smiles at the table, Prime Minister François Legault had on his left his star candidate Kateri Champagne Jourdain, who was elected and who is expected to be appointed minister on Thursday. But at this time, Ms. Champagne Jourdain was wearing a second hat: she was community relations director for Boralex, on unpaid leave during the election campaign.

She was even registered as a lobbyist for Boralex, one of the two promoters of the Apuiat project.

Seated at the same table, there were representatives from Boralex and Innergex. The two firms working in wind power have juicy contracts with Hydro-Québec.

There were also Innu chiefs, local elected officials and the Minister of Aboriginal Affairs, Ian Lafrenière.

The meeting was held in Sept-Îles on September 27th. Even though the Prime Minister posted a photo on social media, the conversations took place behind closed doors.

Questioned by Le Journal,the Prime Minister's Office refused to specify what the discussions were about, limiting itself to saying that Kateri Champagne Jourdain was there “as a candidate for the CAQ”.

Two ethics experts whom we consulted yesterday believe that such a meeting of the Prime Minister with the employer of a star candidate is morally dubious, especially because this employer business with the state.

“[Ms. Champagne Jourdain] did not break any law, but morally and ethically, it greatly questions the power of companies over our governments,” said Saidatou Dicko, professor of accounting sciences at the University of Quebec in Montreal (UQAM) , an expert in corporate lobbying.

“The unhealthy cohabitation between politics and business is really shaking up our ethical values,” she goes so far as to say.

“It poses a problem in the ability of the government decision-maker to defend his legitimacy,” observes for his part Michel Séguin, professor and expert in ethics at UQAM.

Withdrawn after our appeal

On October 11, Le Journal noted that Ms. Champagne Jourdain was still registered in the register of lobbyists. Boralex told us that the newly elected was no longer in its employ “since last October 3, in accordance with the Quebec Elections Act”.

And the next day, October 12, the registration of Mrs. Champagne Jourdain was removed from the register.

Could the newly elected be subject to sanctions? Nothing is less certain.

The code of ethics for elected members of the National Assembly provides that certain offices are incompatible with the office of deputy, in particular the exercise of any lobbying activity.

However, there is no provision regarding candidates, nor candidates elected but not yet sworn in.

“If there are reasonable grounds to believe that a Member may be in breach of a provision of the Code, an investigation could be initiated by the Commissioner, on her own initiative or at the request of one or another member of the National Assembly”, indicates the Ethics Commissioner.

At the time when Kateri Champagne Jourdain was a lobbyist, five of Boralex's nine mandates were aimed at communicating in particular with the Ministry of the Executive Council (François Legault's ministry), and three were aimed directly at the Prime Minister.

THE APUIAT PROJECT IN BRIEF

Kateri Champagne Jourdain has become the October 3 the first Aboriginal woman elected to the National Assembly.