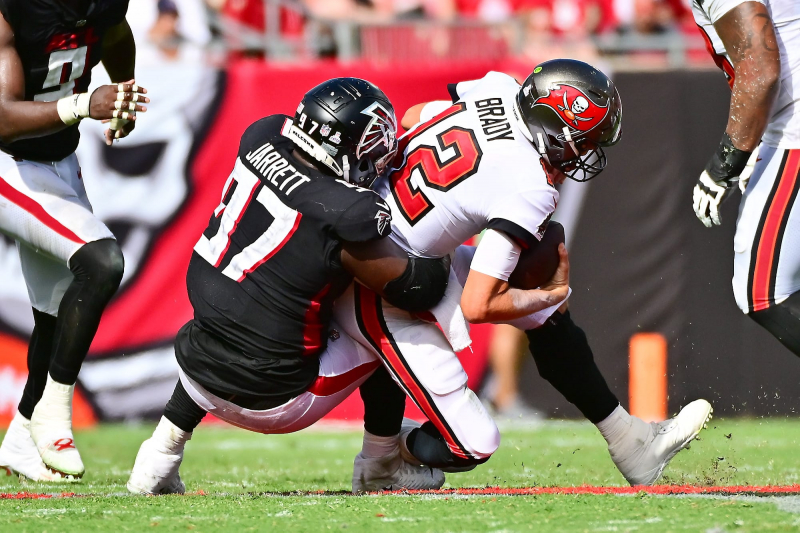 It's an endless circle and there will always be unhappy people. Basically, officiating is human, which involves good and bad shots.

After two decisions that caused discontent last weekend, in cases of roughness against the quarterback , it's the outcry again.

Whether it was Grady Jarrett's penalty against Tom Brady or Chris Jones' penalty against Derek Carr, both officials certainly didn't look good. Particularly in the case of Jarrett; it was even a real shame.

The grumbling is not unjustified. Referees need to do better to avoid giving the impression that quarterbacks are over-coddled.

For several years, players defensive players are drooling over trying to adapt to today's reality.

No hits at head height, no tackles on a player who is not in a position to defend himself, no hits with the helmet, no contact with the receiver in his path. No dessert, for that matter!

To use a sporting analogy, it's a bit like a pitcher seeing his strike zone reduced every year.

In the current case concerning the roughness against the quarterback, the first instinct is therefore to rebel by saying that there are too many penalties of this type and that it keeps increasing to overprotect the quarterbacks.< /p>

But that is not the reality. So far, there have been 28 roughing penalties against the quarterback this fall. After five weeks of activity last year, there were 51. So that's a significant drop.

The problem is not that there are too many roughing penalties against the quarterback, but that they are sometimes very badly targeted.

It is impossible to deny that offensive players, particularly quarterbacks, are increasingly protected by regulations.

This brings unfair situations like the one last weekend and we must eliminate them as much as possible. So that's why many are calling for quarterback roughing to be eligible for video replay.

And what happens next? If this type of penalty can be reviewed and appealed by a coach, how many other infractions that involve the judgment of an official should fall into the same mold?

In January 2020, an uncalled interference in a playoff game between the Rams and Saints caused quite a stir. The NFL had reacted by authorizing, the following season, video resumption in such cases. The result was a fiasco. After only 24 decisions were overturned out of 101 replays that constantly broke the rhythm of the matches, the project was quickly abandoned.

The truth is, quarterbacks are the biggest sellers in the sport, no offense to the purists. The league will always prefer the risk of overprotecting them rather than exposing them, even if it means having a good controversy on occasion.

That doesn't prevent you from tearing your shirt off and denouncing. But, at the end of the day, it would be amazing if the league made big changes. Where there is arbitration, there will always also be a bit of arbitrariness.

Bill Belichick currently has 323 wins as a head coach, including the playoffs. If the Patriots beat the Browns, he will join George Halas, who made Bears history for second overall. The record for most wins for a head coach still belongs to Don Shula, who racked up 347 wins with the Dolphins and Colts.

The Bengals visit the Saints and it will be an opportunity for Joe Burrow and Ja'Marr Chase to reconnect with New Orleans. The two shone together in the NCAA at LSU. In their last game together at Saints Stadium, they won the National College Championship 42-25 over Clemson on Jan. 13, 2020. Burrow had gained 463 yards through the air along with five touchdown passes. Chase had caught two of those touchdown passes, with 221 yards of gain.

Veteran Cowboys tackle Jason Peters has played the majority of his career with the Eagles. He returns to Philadelphia this week in the uniform of the sworn enemy and he did not hesitate to start the fire. “I know the Philadelphia fans and I know they're fucking idiots when it comes to the Cowboys and all the teams, really. They pride themselves on being mean. They are the craziest supporters,” he said. A warm reunion in sight!

In the duel between Jets and Packers, it will be the first time that head coaches Robert Saleh and Matt LaFleur will face each other. It will be special, as the two have developed a strong bond over the years since they were assistants together at Central Michigan in the NCAA in 2004. Each served as the other's groomsman at their weddings. respective. Mike LaFleur, Matt's younger brother, is the Jets' offensive coordinator, along with Saleh.

This is only the second time in 43 seasons that two games have featured teams claiming at least four Week 6 wins. The Bills (4-1) and Chiefs (4-1) will delight fans. fans at the end of the day, while the Cowboys (4-1) and the Eagles (5-0) will be in action in the evening. Also worth noting: this is only the third season since the 1970 merger where each team has at least one Week 6 win.