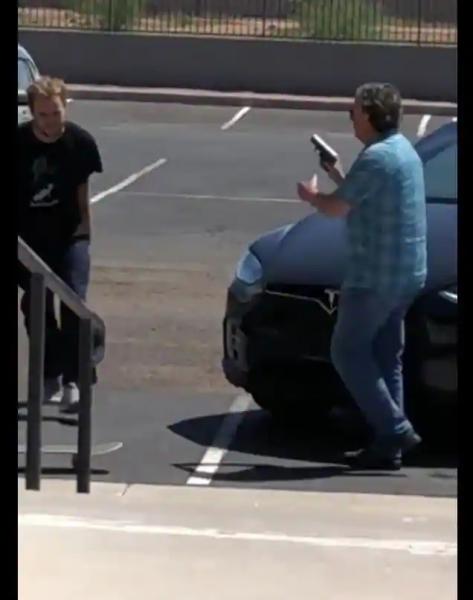 A shocking video is currently circulating on social media of a man pulling out a handgun and pointing it at a group of skateboarding friends in Gilbert, a suburb of Phoenix , Arizona, on Sunday.

Police confirm they have opened an investigation into the incident, according to a local channel affiliated with NBC News.

In the excerpt posted on Twitter, we see a man in a Tesla approaching the group of young people.

The kid is skateboarding & this MAGA 2A asshole thinks the only option is to pull a fucking gun.

Getting out of his sedan, he pulls out a handgun and points it at the skateboarders, for no good reason.

The men obeyed his orders to leave the church premises.

A church official, in response to the video, claimed to know the armed individual, who lives in the area.

A school is located on the church grounds, which explains the presence of many young people in the afternoon.< /p>

However, the spokesperson pointed out that he did not attend the place of worship, which surprised several Internet users on social networks.

The intimidated snowboarder filed a complaint with the authorities the next day, saying this kind of behavior “is really not tolerable”.

Police say they found and seized the gun from the man, without arresting him.