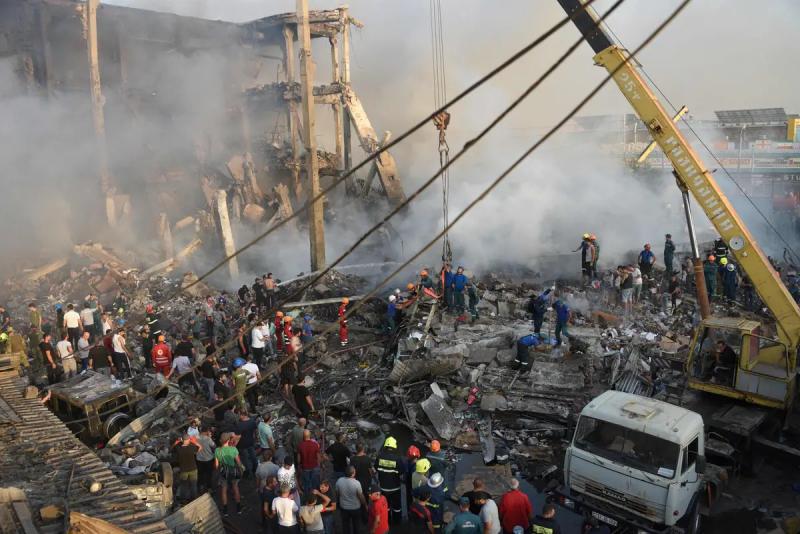 The death toll from an explosion of undetermined origin that occurred Sunday in a commercial area in Yerevan, the capital of Armenia, has risen to six, authorities said on Monday. country of the Caucasus, while excluding the track of an attack.

More than 60 people were injured, while 15 others are missing, according to the same source.

“According to ministry estimates, 99% of it was not an attack,” Mr. Pamboukhtchian assured, explaining that at the beginning there was a fire and only then an explosion occurred.

Small fires and smoke still remain at the site, he added, saying it could last up to seven more days.

Remedial work Clearing and rescue work continues, and more than 350 rescuers are deployed to the scene, Pamboukhtchian said.

For its part, the Armenian General Prosecutor's Office announced overnight the opening of an investigation for “violation of the rules for the storage of easily flammable products” and “violation of the fire prevention rules” which led to the death of several people ” by negligence”.

Armenian Prime Minister Nikol Pashinyan visited the scene of the explosion on Monday morning, according to his press service.

The origin of the explosion, which occurred in the early afternoon at the Surmalu wholesale market, was not immediately known. This place is traditionally very busy on Sundays.

Some media, citing witnesses, reported that the explosion occurred in a place where fireworks were stored.

Videos and photos that appeared on social media shortly after the explosion showed a thick column of black smoke rising into the sky, and detonations were heard.

The explosion caused the collapse of a building.

This explosion brings mourning to a country that is going through a difficult period.

A small country in the Caucasus with around three million inhabitants, Armenia still has struggling to recover from a war that pitted it in 2020 against neighboring Azerbaijan, which ended in a heavy defeat and a major political crisis.

Sign of the ambient nervousness, shortly after the explosion in the Surmalu market the Yerevan metro was evacuated due to a bomb threat, authorities said, adding that no explosive device was finally found.