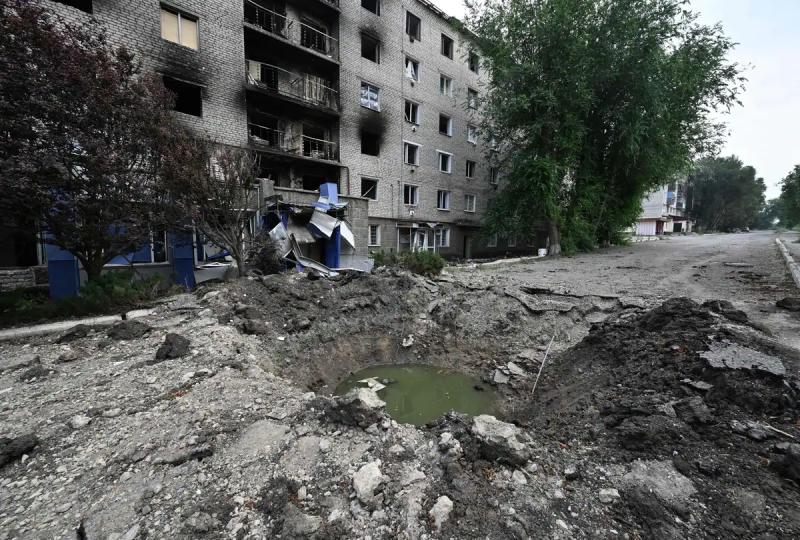 Sitting on the ledge of a five-story building pitting cherries with the lead of a pen, Lyudmila can no longer live in the cellar for three months in Siversk, in her twenties. miles from Lysychansk in eastern Ukraine.

“Three months ago they (the Russians) bombed here, now it's more towards there -down,” she told AFP, pointing to the small road alongside the building, which leads to Lysytchansk, the last major city that Russian forces are seeking to conquer in the Lugansk region.

“It bombs day and night,” yells a woman who refuses to identify herself, sitting on a bench under a tree at the foot of the building.

Then she gets up, takes her small cart with two large empty cans and fetch water from the fountain a little further on.

“We have no more electricity or gas, and it's been three months already,” continues Lioudmila between some sounds of bombardments. Emissions of white smoke are visible in the distance over Lysytchansk.

Meanwhile, two women are preparing potato pancakes at the bottom of a staircase in the cellar, in a pan placed on two bricks and heated by a small wood fire.

One of them shows the AFP journalist his “bedroom” in one of the cellar rooms lit by a flashlight: “Look, the mattresses are over there, in a corner, and we spread them here on the floor” in the evening.

In the next room, a 90-year-old lady stands at a walking frame in the dark.

She would need medicine but it is impossible to find it around here, says a member of her family. No more pharmacies open in the small town, and the stores have almost all been closed for weeks.

“Cared for in the cellar”

“It takes go far to buy something and no one can take us there”, complains a young man passing in front of the building. “You wouldn't have toilet paper,” he asks the AFP journalist.

Another man, Viatcheslav Kompaniets, continues to live in his apartment on the ground floor of the building, all the windows of which were blown out by an explosion in March, when Russian forces sought to escape. approach Siversk, before being repelled by the Ukrainian army.

A building of the small fire station adjoining the building had been destroyed by the rocket that had fallen there, leaving no nothing but a pile of debris.

At the end of May, Vyacheslav suffered a stroke in his apartment: “I was treated in the cellar”, due to the incessant bombardments which were not too far away, explains the 61-year-old man.

Living in a flat open to the four winds is possible in summer, but when the fall arrives, “we will have to close all that,” he says, unaware of how that will be. be done and with what means.

In the meantime, the inhabitants of the building met by AFP hope that the Russian offensive launched on February 24 in Ukraine will be finished, without knowing what the next day will bring, they who live from day to day.