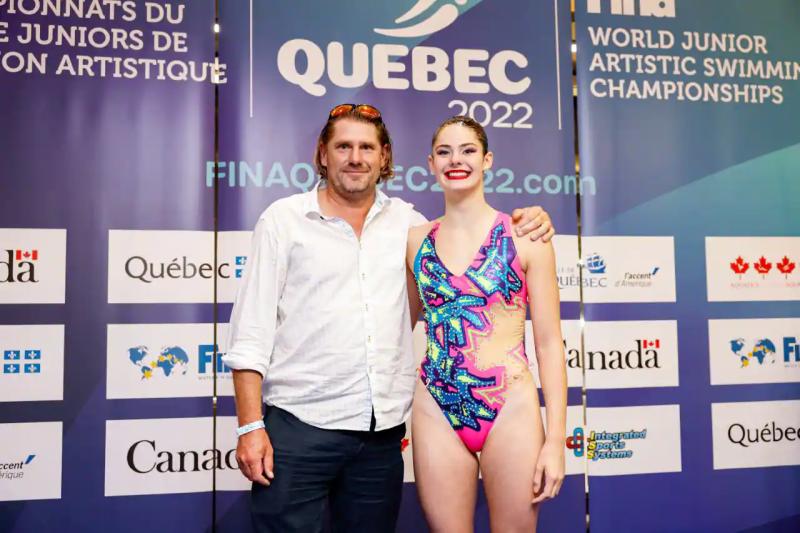 A moved father experienced great emotions tonight when he saw his daughter in action for the first time at the World Junior Artistic Swimming Championships presented at Laval University's PEPS .

Used to pressure after a 21-year career in Europe that culminated in his induction into the German Hockey Hall of Fame in April 2018, Robert Hock was nervous as a as a kid when he saw his daughter Georgia, who wears the colors of the Canadian team, jump into the pool during the team technical final.

“ I was more nervous than when I played hockey, he said after filming the entire performance of the Canadian team who took 5th place. It is very special to see my daughter take part in the world junior championship, which I myself have done twice (1992 and 1993). In her home in the Czech Republic, my mother was watching Georgia's performance even though it was 2 a.m..”

A resident of Fort Pierce since 2018, where he works at a golf club and uses his Ohio State agriculture degree earned remotely after hanging up his skates in 2015, Hock had never had the opportunity to live on features a performance by his daughter, who lives in Calgary with her mother and brother. when he played with the formation of Adler Mannheim in the most powerful German circuit (DEL).

Playing with René Corbet during this 2010-2011 season, Hock later became the brother-in-law of the former Nordiques, Avalanche, Flames and Penguins forward.

He met his ex-wife who had come to visit his sister and Corbet in Germany.

Born in 1973 in the Czech Republic while Communists ruled the country, Hock fled to Germany 15 years later with his sister and parents who wanted to provide a better future for the family. Everyone successfully passed the Iron Curtain and a new life began in West Germany.

“I got my German passport quickly because I was good at hockey,” said Hock, who scored 1,029 points in his professional career of just over 1,000 games. We had crossed the border to reach Yugoslavia. My parents (her father is now deceased) moved back to the Czech Republic when the communist regime collapsed. My mother still owns a house there.”

Known for his skills as a playmaker, Hock would have liked to evolve in the NHL, but his experience was short-lived.

” I didn't get drafted, but Detroit offered a try, points out the 5 9 in center. After a game in Binghamton where I was shuffled, I decided to return to Europe. At that time, the NHL prioritized toughness over skill.

Hock still remembers his experience at world juniors. “I faced Eric Lindros in 1992, the same year he represented Canada at the 1992 Olympics. Darius Kasparatis (former Russian fullback known for his tough play) broke my shoulder during the tournament.  ”

During the 1993 worlds, he met goaltender Manny Legace who led Canada to the gold medal. gold and who played with him in Germany in 2010-2011.

The former Blues and Red Wings goalkeeper has become his best friend. A Columbus Blue Jackets goalie coach since 2018, Legace secured an interview for Hock with the organization for a possible scouting position.

“I don't know if I want to go back to hockey , he says. Jets director of player development Jimmy Roy offered me a job three years ago, but I didn't want to be constantly on the road. We will see if Columbus offers me something or not when we meet when I return to the United States.