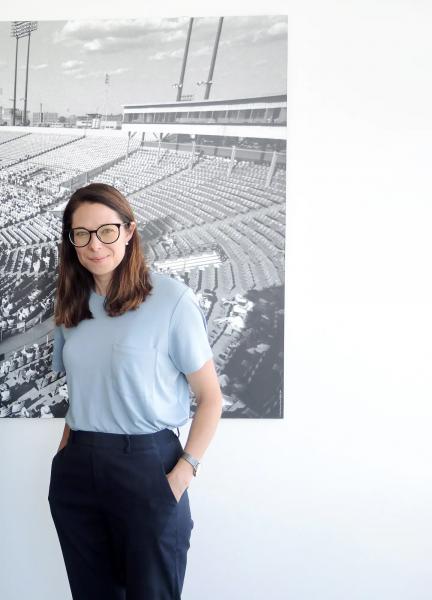 The former professional tennis player, native of Saint-Jean-sur-Richelieu, Valérie Tétreault has been named director of the National Bank Open.

She will never forget the sacrifices made by his father, Jean, who is an electrician at THOMAS & BETTS, and his mother, Maryse, who works at the town hall of Saint-Jean-sur-Richelieu, as well as the moral support of his sisters Arianne and Marilyne after a difficult defeat. Valérie told me that it was thanks to them that she was able to make a career in tennis.

Valérie aged very young, because at the age of 11, she began her career amateur tennis on the international scene.

I was having fun with my friends, and later I was invited to participate in a local tennis program. I also played basketball and soccer.

How did you choose your sport?

When I was 7 years old, my mother had observed that I always drew the same thing at school. After consulting someone, my mother learned that I was looking for a passion.

Absolutely, because one day I decided to play tennis, and soccer as a complementary sport.

< p>My father liked to play tennis for fun, while his sister, Sylvie Tétreault, who is now a psychologist, got a scholarship to the University of San Diego to play tennis.

She became your trainer.

When she came home, my aunt Sylvie noticed that I had a talent for tennis.

The first among many other sacrifices of your parents.

After school, my grandparents, or at lunchtime, my parents left work to drive me to the Île des Soeurs tennis club, where my aunt taught, without forgetting to take me wait for the ride home.

You were a young public transit user.

I was 11 years old and I was traveling by bus from my house to the Île des Sœurs tennis club.

The sports-studies tennis program was in Laval, at the Vanier school. Every day, I traveled for five hours using public transport.

Did you say five hours by bus?

Sometimes it was a bit longer in a snowstorm or when the Champlain Bridge was congested.

At 11, you cooked, did your laundry and managed your budget.

I participated in the amateur tournament at the Orange Bowl in Miami. I lived with three other players in a condo, so I had to manage.

At 12, you were playing in France.

My parents couldn't always make the trips, so my mother lived at home in Quebec on Paris time. Yes, she was worried. It wasn't always easy to find a calling card, make collect calls and especially find a phone to make them.

Did you spend a summer vacation with your family ?

In reality, my parents and my sisters went to the cities in which I participated in tournaments in Quebec: another family sacrifice.

Playing an elite sport is very expensive for parents. My father and my mother made a lot of sacrifices to make sure that my two sisters did not miss anything and to find a way to pay my registration fees, trips, my tennis lessons, etc.

Did you worry about not having enough money?

When I was on the professional circuit, at 18, I sometimes worried that I didn't have enough money, but in the end, it was good.

Being so young, did you get bored while traveling?

According to you ? Leaving for three weeks, I am 11 years old, without being able to speak English, and my teammates who do not speak French, it was not easy. However, I learned to master English. After a loss, I missed my family a lot.

At what age did you realize that you wanted to become a tennis professional?

I had 14 years old when I suffered a major knee injury. During my recovery, I realized how I missed tennis.

Would you have liked to have a teenage life like your sisters?

I always envied them because they could have fun while I had to train. My sisters encouraged me so much to pursue my dream that they were my source of inspiration.

Your first car was a yellow used Mazda.< /p>

For you, tennis is a life lesson.

I learned to cook, managing my budgets, traveling alone, learning English and appreciating the sacrifices my father, mother and sisters have made for me. It's a life lesson.

What was your most intimidating moment in tennis?

I have been invited to participate in the qualifications for the Rogers Cup in Montreal. The long tunnel leading to center court was intimidating.

The Claude-Raymond Fund helped you.

I will always be grateful to Mr. Raymond, the former Expos pitcher, because he allowed me to start an international career, and the Claude Raymond Fund has always supported me financially throughout my career at the amateur level.

You appreciated the Quebec tennis group of your time.

I was blessed to be able to count on friends like Aleksandra Wozniak, Stéphanie Dubois and Marie-Ève ​​Pelletier.

My spouse Julie Gravel and I are so happy to share our life with our daughter, Adelaïde, because it allows us to live so many beautiful moments with the family.