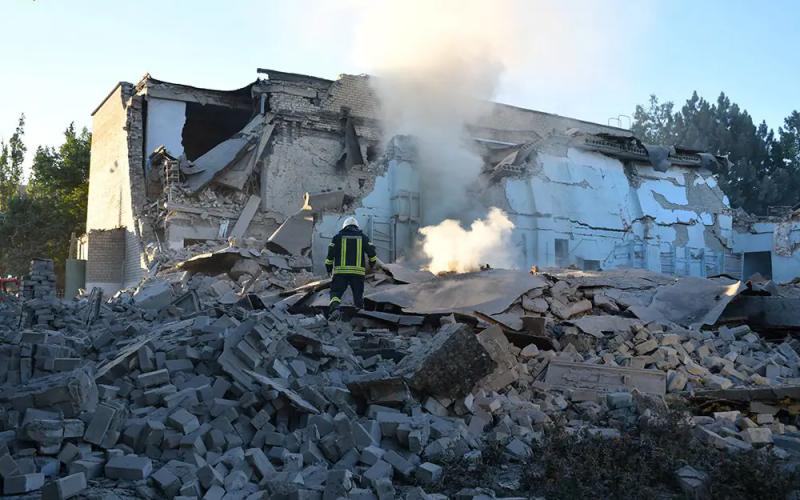 At least 17 people were killed in strikes on a city in central Ukraine on Thursday, as the European Union and the International Criminal Court (ICC) are due to discuss in the Netherlands the war crimes attributed to the Russian army.

According to the Ukrainian emergency services, the shelling hit a parking lot next to a commercial building in the center of Vinnytsia, an important railway junction in the center-west of the country. The images published by the emergency services show a building of about ten floors gutted and burned, dozens of charred carcasses.

According to the Ukrainian prosecutor's office, “17 people died, including two children” and several dozen were injured.

“Every day Russia kills civilians, kills Ukrainian children, fires missiles at targets civilians where there is nothing military. What is it, if not an open act of terrorism?” Ukrainian President Volodymyr Zelensky said on Thursday on Telegram after the announcement of the shootings at Vinnytsia.

At the same time, political, diplomatic and judicial leaders from around the world, including European foreign and justice ministers, were preparing to meet in The Hague on Thursday for a conference on accountability for crimes committed in Ukraine since February 24.

Mr. Zelensky is to make a statement there by videoconference and his head of diplomacy Dmytro Kouleba will be present.

The International Criminal Court in The Hague opened in early March, a few days after the Russian invasion of Ukraine, an investigation into the situation in the country and dispatched dozens of investigators there to collect evidence of possible crimes of war.

His prosecutor, Karim Khan, went to Boutcha in April, a town near Kyiv that has become the symbol of the atrocities of this war, where AFP journalists had discovered the bodies of 20 civilians in a street and where, according to Ukrainian officials, hundreds more people were killed.

Strikes on the south

For several weeks now, Russian strikes on western and central Ukraine, away from the eastern and southern front lines, have been relatively rare.

But the war is spreading and is now raging around cities like the port of Mykolaiv, near the Black Sea and key lock on the road to Odessa (southwest), which was hit by a “massive missile strike” early Thursday morning, for the second consecutive day.

“Two schools, transport infrastructure and a hotel were damaged,” the presidency said in its daily morning briefing.

Images released by local authorities show the remains of a building destroyed by a bombardment, municipal workers cleaning up the debris scattered by the attack.

Kyïv for its part launched a counter-offensive several weeks ago to retake Kherson, located about sixty kilometers from Mykolaiv and the only regional capital captured by Moscow since February 24.

The main battles, however, remain focused on eastern Ukraine and the Donbass, an industrial and mining basin that Moscow has promised to completely conquer.

According to the governor of the Lugansk region, Sergiï Gaïdaï, “massive artillery and mortar attacks continue (and) the Russians are trying to break through towards Siversk and open the way towards Bakhmout”, where a civilian died in bombardments during the night of Wednesday to Thursday.

The pro-Russian separatists supported by Moscow claim for their part that they are close to winning a new victory there, a few days after taking several important cities.

“Siversk is under our operational control, which means that the enemy can be hit by our fire in the whole area,” said a separatist official, Daniïl Bezsonov, quoted by the Russian news agency TASS .

AFP was unable to independently confirm this information.

A little further north, in the region of Izioum, “we dig when it's calm, we hide when it's shooting”, confided to AFP a soldier in labyrinthine trenches several tens of meters long built by the Ukrainian army, to the sound of artillery fire.

One of its officers, however, declared that “the situation is under control”, affirming in this zone that the Russian army is no longer advancing and that the goal is “Total Victory.”

On Wednesday, during a meeting of military experts in Istanbul, Russia and Ukraine also made progress on the thorny issue of blocking grain exports from Ukrainian ports.

Des “really substantial progress” has been made, commented UN Secretary General Antonio Guterres, who said he hoped that a “formal agreement” could be concluded soon and evoked “a ray of hope to relieve human suffering and hunger in the world”.

The agreement negotiated by Antonio Guterres for more than two months aims not only to bring out through the Black Sea some 20 million tons of cereals blocked in Ukrainian silos, particularly in Odessa, but also to facilitate Russian grain and fertilizer exports.

Ukraine is one of the world's leading exporters of wheat and other grains and time is running out, to the global rise in food prices which poses risks of f amine, especially in Africa.