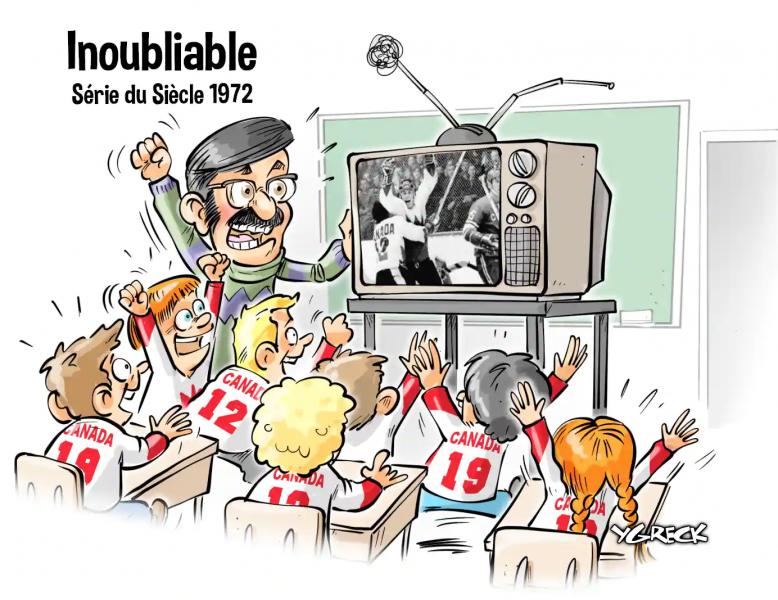 At the end of the Series of the Century, when the opponents shook hands, I buzzed in the face of Vladislav Tretiak. It was the first time I had seen a Soviet smile.

I was 16 and with my friends I was a problem: I loved them, the Soviets in their humility, their modesty. Canada's players, stars already paid like kings, dressed like princes and adored like hockey emperors, looked down on the Soviets. It was rude, insolent even.

Before the first game on September 2, we did not know a single CCCP. In their old soft leather skates, old-fashioned sticks and even more worn gloves, the Soviets were pitiful, and, yes, it smelled of impending humiliation.

The flamboyant Canada, it was thought, was going to crush the sad Communists in the Montreal Forum. I was there. Even the warm-up(warm-up period) was drooling. The Canadians were smiling, a little swaggering, winking left, patting their ass right, and hands in their long Brylcreem hair.

The “Russians” all had a helmet and a military face. You would have sworn they were unhappy to find themselves in such a lion's cage.

Thirty seconds of play in the first period and the big Phil Esposito scores. Six minutes later, Paul Henderson adds one. This is where what I consider to be the biggest dial in hockey history rang. As if those emotionless faces, those iron-hard men, those soldiers had drawn their weapons. Suddenly, at the end of the first period, there was a tremendous demonstration of a passing game the likes of which had hardly ever been seen in North America. North-south, east-west relays, incessant permutations, total complicity and the speed of execution which continued to increase. It felt like the Soviets were 10 on the ice. They scored, they literally took control of the game in less than 20 minutes, and on this Saturday, September 2, on Atwater Street in Montreal, we had just learned that there were other ways to play hockey. That evening, everyone left the legendary building with a lesson that, 50 years later, still holds true.

Yes, Canada won this series, but by a very thin line, and the big winner is above all hockey, a magnificent team sport. Already humiliated and imprisoned in the communist system, the players of the USSR showed the rest of the world that they were there even if they were never seen, confined in an inhumane regime. And Canadians can count themselves lucky. They came home with a narrow victory, but really with a series of lessons. Of hockey, but also of humility, of respect towards their public which they believed gained in advance.

In the seven other matches, there were beautiful great moments, but there was also baseness, savage blows, degradation.

At the end of the very last game, in my class at the Polyvalente Édouard-Montpetit, I was a little sad for Tretiak and his co-prisoners, but at least they were smiling.

And after seeing, in the 6th game, Bobby Clarke land a real blow of an ax deliberately breaking the ankle of Valeri Kharlamov, the best player in the USSR, I never had any respect for this primitive from Saskatchewan.

Even today, when I see a good series of passes, I often think of the end of the first period of the first game on September 2, 1972. I was there with my uncle Paul-Yvon. What a Saturday night!