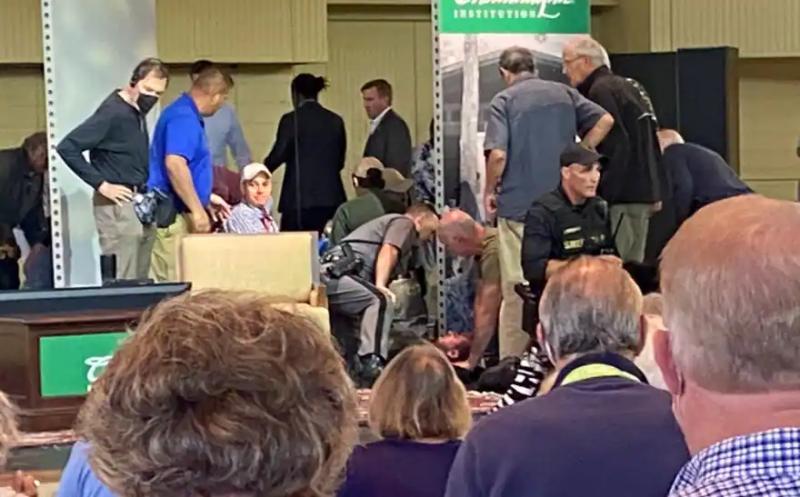 British author Salman Rushdie, whose controversial book The Satanic Verseshad made him the target of a fatwa by Iranian Ayatollah Ruhollah Khomeini in 1989, was stabbed in the neck by a man on Friday during a conference in western New York, and his state of health is 'unknown', according to police.

“A suspect ran onto the stage [of an amphitheater] and attacked Rushdie and an interviewer. Rushdie suffered an apparent neck injury after being stabbed and was airlifted to hospital by helicopter. His condition is not yet known,” New York State Police said in a statement, adding that the attacker was immediately arrested and taken into custody.

UPDATE: Salman Rushdie has been transported to the hospital via helicopter. His condition is unknown, by New York State Police.pic.twitter.com/ycR4TnZT2b

Contacted by AFP, police in Chautauqua County, where the writer was scheduled to speak, confirmed that a person had been “stabbed” without specifying at this stage the identity of the victim.

“The most terrible event has just happened at the Chautauqua Institution – Salman Rushdie has been attacked on stage. The amphitheater is evacuated”, wrote a witness on social networks.

No further information was available at this stage.

Video images posted on social networks show spectators in a theater rushing on stage to help someone seen on the ground.

Writer Salman Rushdie was stabbed before delivering a speech at the Chautauqua Institute, New York. pic.twitter.com/Hj3sRqHPro

Salman Rushdie, born in 1947 in Bombay, India, two months before his independence from the British Empire, tries not to be reduced to the scandal caused by the publication of the Satanic Verses, which had set fire to the Muslim world and led in 1989 to a fatwa calling for his assassination.

“My problem is that people continue to perceive me as 'single prism of the “fatwa””, said a few years ago this free-thinker who wants to be a writer, not a symbol.

But current events – the rise of radical Islam – have constantly brought it back to what it has always been in the eyes of the West: the symbol of the fight against religious obscurantism and fight for freedom of expression.

Already in 2005, he considered that this fatwa had constituted a prelude to the attacks of September 11, 2001.

Constrained to live in hiding and under police protection, going from cache to cache, he calls himself Joseph Anton, in homage to his favorite authors, Joseph Conrad and Anton Chekhov. He had to face immense loneliness, further increased by the break with his wife, the American novelist Marianne Wiggins, to whom The Satanic Verses are dedicated.

Settled in New York for a few years, Salman Rushdie – arched eyebrows, heavy eyelids, bald head, glasses and beard – had resumed a more or less normal life while continuing to defend, in his books, satire and irreverence.