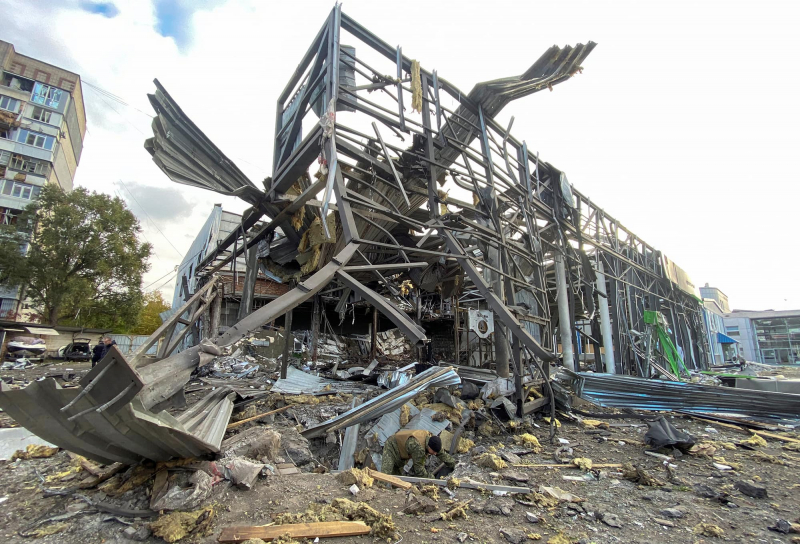 The Russian army is in serious danger of repeating its violent attacks on Ukrainian cities, warns President Volodymyr Zelensky, whose allies are warning Vladimir Putin that he will be held accountable for his ravages.

“The Russian leader, who is at the end of his reign, still has the means for an escalation”, insisted the Ukrainian leader in his text planned for his virtual meeting on Tuesday with the members of the G7.

On Monday, Russian bombardments on an unprecedented scale since the end of June had affected Kyiv and other cities in Ukraine, leaving at least 19 dead and 105 injured.

On Tuesday, Russia, which has suffered numerous military setbacks recently, continued its lesser fire, striking in particular far from the front the energy installations in the west of the country.

Experts transported to Lyman on Tuesday a of the 44 people buried in a mass grave.

“[Vladimir Poutine] must take the initiative again, otherwise he risks being challenged, he is starting to be,” explains Pierre
Jolicoeur, vice-rector for research at the Royal Military College of Canada.

In a press release, the G7 also condemned these “indiscriminate attacks against innocent civilian populations”. which are “a war crime”, promising to “hold President Vladimir Putin to account”.

In an interview with CNN, the American president, Joe Biden, judged that his Russian counterpart had made “ a miscalculation ” believing to settle easily in Ukraine.

Remember that at the start of the invasion, Putin planned to take over large portions of the territory and establish a new government.

“It failed miserably and Russia had to change its objectives into a military campaign more classic ”, points out Pierre Jolicoeur.

In addition, the Russian soldiers are currently exhausted, according to what the head of the British intelligence service, Jeremy Fleming, reported to the BBC on Tuesday.

Deployment of prisoners and inexperienced soldiers demonstrates 'desperate situation' of Moscow, he adds, specifying that there are no signs suggesting the imminent use of nuclear weapons.

Ukrainians were terrified in a Kyiv metro on Tuesday during a a Russian bombardment.

At the same time, faced with the upsurge in attacks, Zelensky again called on G7 members to contribute financially to a no-fly zone in the skies of Ukraine .

This request has been made repeatedly by the President, to no avail. Such a strategy could have major consequences for the Ukrainian allies, recalls Pierre Jolicoeur.

“If we want to apply a no-fly zone, that presupposes a military commitment and the risks of skids that will avec ”, he argues.

Ukraine's Prosecutor General's Office announced on Tuesday that it had exhumed the bodies of 78 civilians in two towns in the eastern Donetsk region, recently recaptured by Ukrainian forces.

Some bodies exhumed in Sviatorguirsk showed marks of “violent death”, and the charred remains of two people were found in a car.

Russia has officially named the American giant Meta, parent company of Facebook and Instagram, as a “terrorist and extremist” organization, opening the possibility of reinforced legal proceedings against its users in the country.

On the Telegram messaging system, still authorized in the country, the renowned lawyer Pavel Tchikov indicated on Tuesday that proceedings could be initiated in several cases: if a person publicly mentions Meta without indicating its status as a prohibited organization, or if it shows the logo of the company and its subsidiaries.

Ukraine on Tuesday accused Russia of having kidnapped a leader of the Zaporizhia nuclear power plant, while Vladimir Putin was to exchange with the head of the International Agency for atomic energy, in the afternoon.

« The Russians are trying to obtain essential information on the personal files of the employees of the plant […] in order to force the Ukrainian personnel to work for Rosatom [the Russian operator] as soon as possible,” accused the Ukrainian nuclear operator of the Zaporizhia power plant, Energoatom.