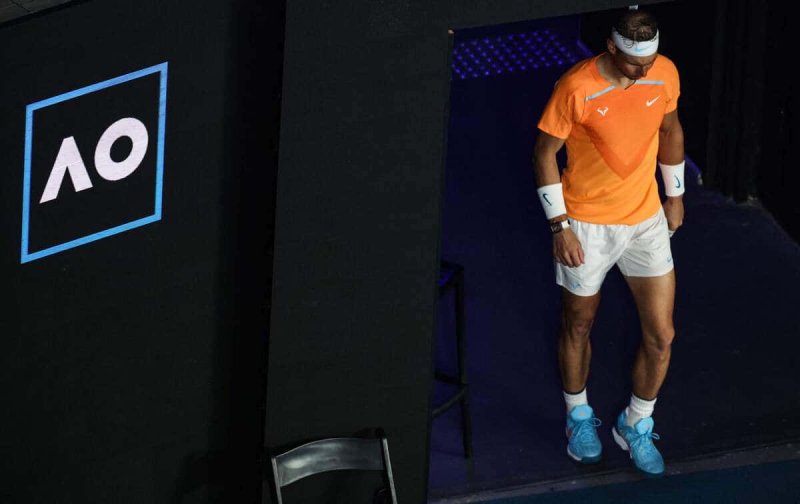 MELBOURNE, Australia | In light of his recent defeats, we suspected that Rafael Nadal would not last long at this Australian Open, where he was the defending champion. But now another tile fell on the head of the Spanish legend on Wednesday.

“Rafa” was already trailing a set to zero ahead of the American Mackenzie McDonald in his second round match when his left hip started hurting him at 5-3 in the second set.

The tournament favorite was then taken out of Rod Laver Arena to undergo treatment. But in his box, his relatives knew too well what was going on. His trainer Carlos Moya was disappointed. His wife Xisca was wiping away a few tears.

After that foot he has to treat for a degenerative disease and that abdominal muscle that tore at Wimbledon, “Rafa” was hurt again.

He thought about giving up

The 36-year-old tenor thought about giving up the match. But he finally preferred to hang on, try to fight to the end. It was in vain. Unable to hit the backhand, struggling to run, Nadal lost 6-4, 6-4 and 7-5 against the 65th in the world, who seemed very uncomfortable celebrating his victory in front of a crestfallen champion.

“I have to admit that I am mentally destroyed, conceded the Spaniard a little later, at a press conference. I hope it's not too serious. […] I hope this injury won't take me away from the pitch for too long because then it will be hard to go through the recovery process again.”

“Rafa” knows said process by heart. Because it wasn't just the foot, the abs and now the hip: his career, although crowned with 22 major titles, was also marked by a host of other injuries.

“It's not just the recovery,” he noted. There is also all the volume of work that needs to be done to regain an acceptable level. I've been there too many times in my career… I think I can still do it, but it's not easy.”

But despite his age, the second in the world – who will drop to at least sixth place after this setback – says he is ready to try again.

Because he deeply loves tennis.< /p>

“I know that one day I will have to quit. But when you love doing something, the sacrifices you make are no longer real sacrifices,” he pointed out.

“That being said, for sure it's tiring and frustrating to have spent so much of my career in recovery, trying to come back.”

Nadal has spoken about this often recently: the last seven months, marked by a single result that was quite correct by his standards, namely this fourth round in New York, have been complicated.

“I accepted [all these periods of rehabilitation] quite well. , he said. Now I don't know what's going to happen, but I hope to avoid another long period away from the, otherwise it's going to be super difficult to find the rhythm, to become competitive again and to get back to fighting for my goals.”

“Let's see what the injury returns to and how I'll be able to follow the schedule.”